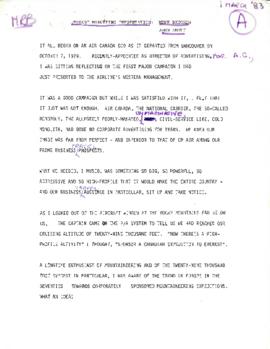 Michael Breckon was Air Canada’s Director of Advertising and Promotions at the time of the Everest expedition. Born and educated in Britain, he emigrated to Canada at 26 in order “to escape the shackles of British class society” and further his experience in his chosen field of marketing communication. He believed in the power of corporate promotions - linking the airline’s name to sporting and artistic events whose objectives reflected those of the airline.

Michael had been fascinated by Mount Everest since it was first climbed in 1953, the news of which he heard whilst sleeping on the pavement outside Buckingham Palace the night before the coronation of Elizabeth II. The mountain and those who climbed it became special to him. In 1979 he had just returned from a meeting with the airline’s management where the subject of promotions had been discussed, when he read in "The Globe and Mail" that the fledgling Canadian expedition was seeking sponsorship. He phoned John Amatt: his opening words were “I think you and I are looking for each other.” Three years later, to the day, a Canadian climber sponsored by Air Canada, stood atop the world’s highest mountain.

Sous-fonds consists of material relating to Michael Breckon's role as Director of Advertising for Air Canada during the 1982 Everest Expedition. The sous-fonds contains news articles, speeches, and correspondence.