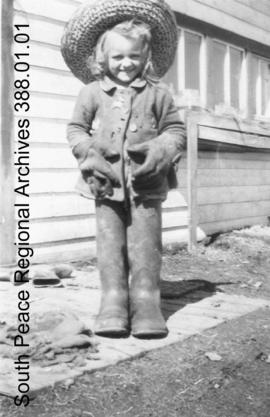 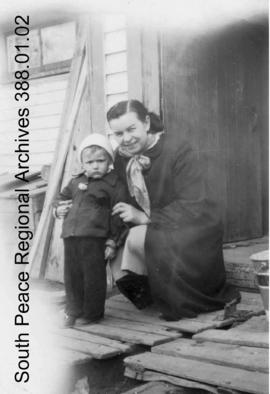 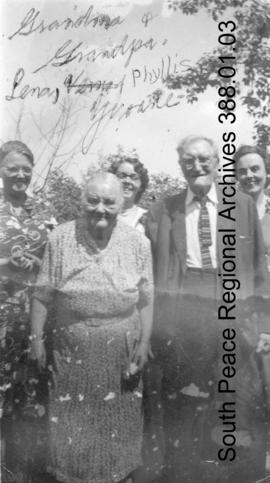 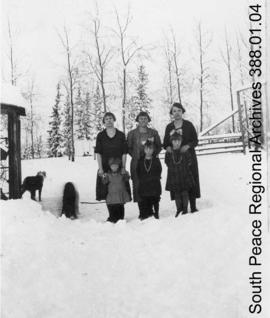 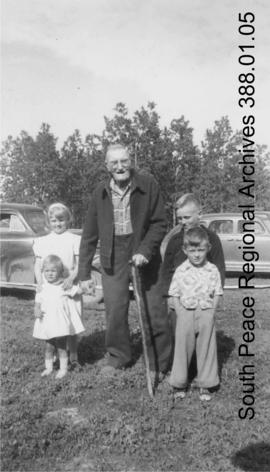 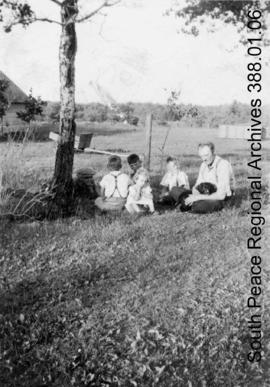 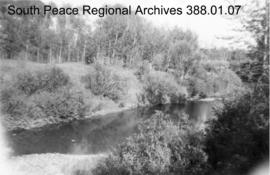 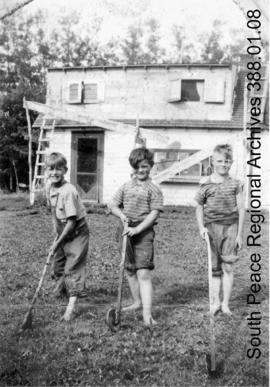 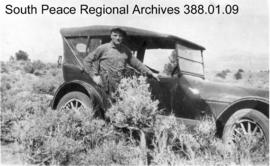 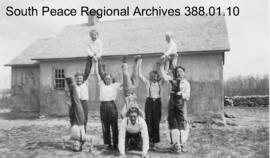 Hans Hommy was born in Vraadal,Telemarken, Norway and immigrated to Minnesota, U.S.A. in 1888. Sidsel Slatte was born in Hol, Halingdul, Norway and immigrated to Minnesota in 1890 where she met Hans. They were married in Crookston, Minnesota and their nine children were born in that state. In 1916, Hans, Sidsel and six of their children arrived in the Peace country to a homestead near Albright, bringing two carloads of effects and animals. The following summer, Lena, Sigrid and Chris joined the family. The six boys all filed on homesteads near their father. They built a three room log home and a barn for their dairy cows. Later a large home was built. The Hommys were known for their hospitality and always welcomed visitors. Mother and father retired to Hythe for their last 17 years. Hans passed away in 1957. Sigrid taught school in Valhalla Center the fist year she was in Canada and married Andrew Johnson in 1918. They had three daughters: Evelyn, Opal, and Viola. Olaf, a farmer at heart, married Yvonne Gant of Grande Prairie and they had two daughters, Gwen and Dawn. Olaf passed awaysuddenly in 1964. Chris farmed and worked as a road construction foreman. He married Svea Anderson and they had sons Wayne, Larry, John, and Franklin. Svea died in 1943 leaving a young family; Chris died in 1959 and young Johnny drowned at age 11. Franklin was adopted by aunt and uncle Lena and Sam Larsen. Henry Hommy was secretary-treasurer for the Gimli S.D. for 25 years. He married Verna MaDonald of Hythe and they raised three sons and a daughter. Donald was killed in a car accident in 1967; Milton became an electrician in Grande Prairie; Gordon became a bank manager in Fairview; Lorraine (Mrs. Eldon Cage) lived in Beaverlodge. Lester farmed and worked in the lumber business. He joined the airforce during WWII but did not go overseas. He married May Smith of Grande Prairie and they raised four children: Garnet served four year overseas during WWII; Robert lives in Hythe; Clare served 8 years on Hythe Village Council and then served as Hythe's mayor; Deanna (Mrs. Arthur Lester) lives in Slave Lake. May passed away in 1959 and Lester in 1968. Sadie attended Camrose Luthern College in 1921-22 and then worked as a telephone operator in Drumheller and Calgary. She married Claude Taylor of Stoney Plain and they have a daughter, Beth. They have lived in Alaska since 1952. Alex married Marie Brat, a Norweigan girl, and they had six boys: Wilfred, Carol, Lincoln, Blair, Grant, and Sidney, and two girls: Amy and Janette. Alex suffered from heart trouble and passed away in 1962. Marie sold the farm and moved to Beaverlodge. Johnny, the youngest of Hans and Sidsel's children, married Martha Sebastion of Lake Saskatoon and they had five children: Myrna (Mrs. Jerry Truax) nursed in the Hythe Hospital, Mary and Sharon are married and live on Vancouver Island, Lena was the first teacher in Molde School and then married Sam Larsen in 1921. The only son was Barry. Johnny was killed while working on the highway south of Hythe in 1955.

The fonds consists of 37 photographs covering 3 generations of the Hommy family.

A finding aid is available at http://southpeacearchives.org/milton-hommy-family/