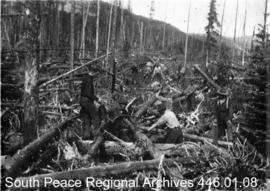 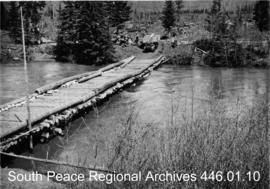 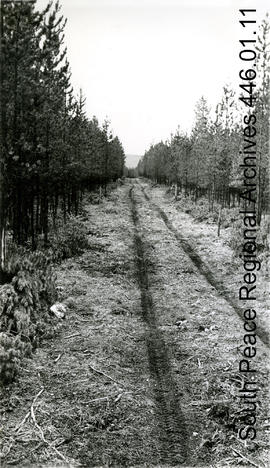 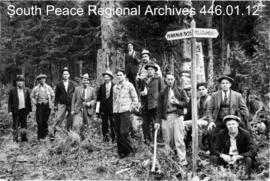 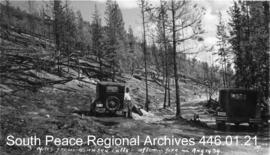 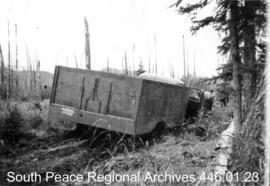 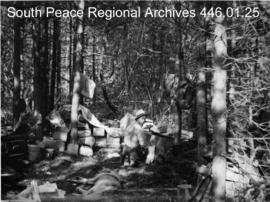 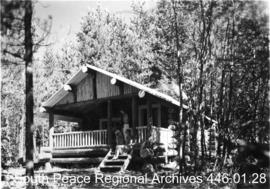 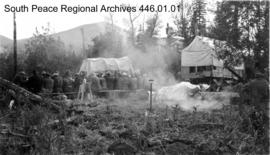 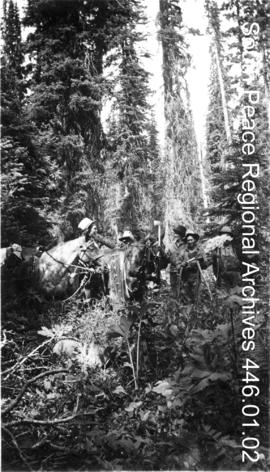 Mr. Arthur Smith came to the Lake Saskatoon District in 1912 to join his father, George Smith, who was homesteading in the area. With him he brought registered cattle and later he grew registered wheat. In 1920 he married Jessie Hazard. When the Monkman Pass Highway Association (MPHA) was formed in 1936, both Arthur and Jessie joined the organization to pressure the government to build a Coastal Outlet for the marketing of grain and produce from the Peace Country. The MPHA promoted the linking of Rio Grande, AB with Prince George, BC through a mountain pass which the native people used, a distance of 132 miles. When support was not forthcoming from government sources, the MPHA began to build the road with donated supplies and volunteer labour. Art became the Publicity Director for the MPHA, and Jessie travelled everywhere with him, speaking out for the cause, until lack of funds and the outbreak of World War II forced the organization to stop the project. Mr. Smith continued to farm at Lake Saskatoon until 1943, when they moved to Dawson Creek, BC. Alex Watt was the secretary of the Monkman Pass Highway Association and one of the pathfinders.

The records were discovered on an abandoned homestead where the Red Willow River runs into the Wapiti River, by the Grande Prairie River Rats, a boating club. They were in an old barn which may have belonged to Arthur Smith. They were donated to the Grande Prairie Museum in 1972.
The Grande Prairie Museum transferred the records to the South Peace Regional Archives in 2000.
An accrual of records preserved by Frances Harris Watt was donated to South Peace Regional Archives in 2010 by Jean Harris.
An accrual was brought in October 10, 2013 by Peter Martin who is a relative of Crosbie McNaught.

The fonds consists of letters written by or addressed to Arthur Smith, in his position as Publicity Director of the MPHA, and correspondence, minutes, 2 maps and 29 photographs collected by Alex Watt, Secretary of the MPHA. Included are three pamphlets, a copy of "Monkman Pass and Trail History" (1982), a hand drawn map of the trail, 11 newspapers (1936-1937), news clippings, correspondence received by Crosbie McNaught, speeches and radio addresses given by D.W. Albright and a minute book (April-Oct. 1939)

A finding aid is available at http://southpeacearchives.org/monkman-pass-highway-association/