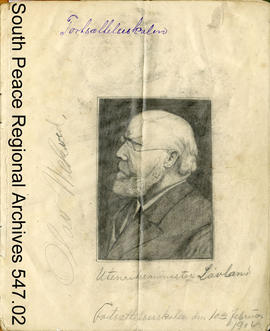 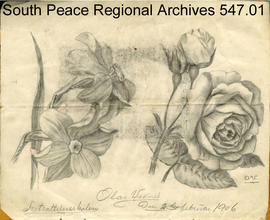 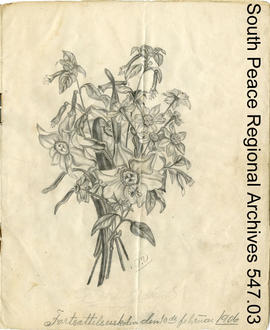 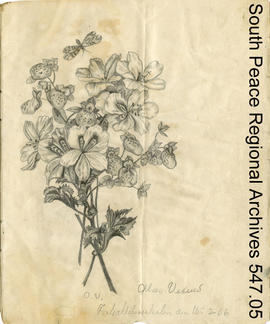 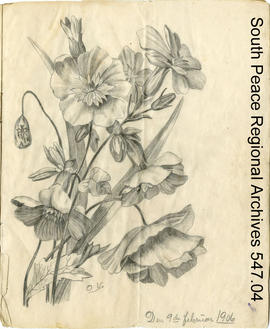 Olaf Vekved (aka Wekved) was born in Norway, presumably Bardu, from where he came to Canada in 1910. He arrived with his brother George and settled at Tofield, Alberta, where another brother, Ingebrigt, had settled in 1909. In 1913, George moved north to the Peace Country and filed on the SE 20-73-7-W6, north of Bear Lake. Olaf followed in 1915, but chose land further north, on the NW 5-75-8-W6 in the Northfield area, where a number of other Norwegian families were settling. They were joined that same year by brother Ingebrigt, who had skiied up over the Edson Trail, and filed on the SW 24-74-8-W6. Ingebrigt had married Alma Johnson, whose parents, the Lars Johnsons, had moved from Tofield to Northfield in 1912. In 1924-1925, Olaf's father, and then the rest of the family, also arrived from Norway and settled in the LaGlace district. It appears that Olaf never married. From the records, we see that he was a gifted artist. He farmed in the Northfield district until ca. 1960. He died in 1969, at the age of 82, and is buried in Norden Cemetery, 1 mile east of LaGlace.

The records were deposited in South Peace Regional Archives in 2013 by Judy Hopkins who found them in an old farmhouse they purchased two miles north and 2 miles east of LaGlace. It appears this home once belonged to the Vekved family, and it is presumed the records were given to the family after Olaf's death in 1969.

The fonds consists of an unlined Norwegian School scribbler labeled "Tegnebog for Olav Vekvic," containing five pencil drawings signed by Olav and dated 1906, when he was 19 years old. Most of them are floral bouquets, but one is a portrait of an elderly man described as "Utenrikeminister Lavland". There is also a 1928 report from the Experimental Sub-Station at Beaverlodge, AB, and a 1920 letter from The Pellman Institute regarding a course of studies about which Olaf had enquired.

These records were donated to South Peace Regional Archives by Judy Hopkins on September 26, 2013.

A finding aid is available at http://southpeacearchives.org/finding-aids/fonds-547-olaf-vekved-fonds/