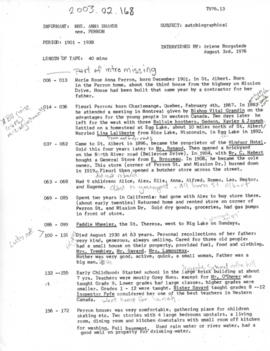 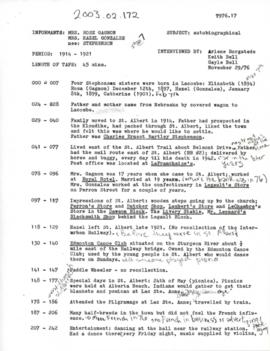 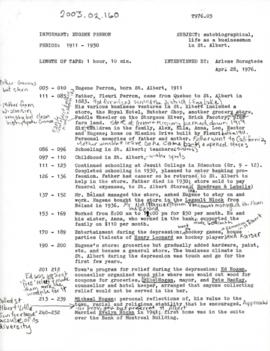 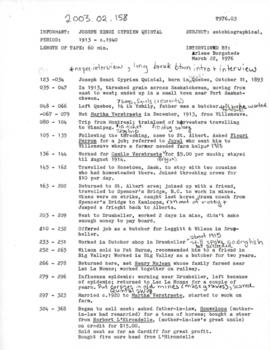 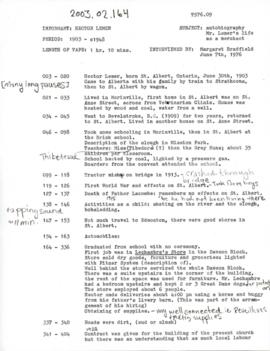 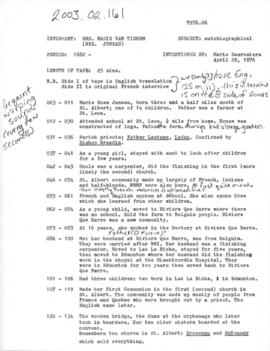 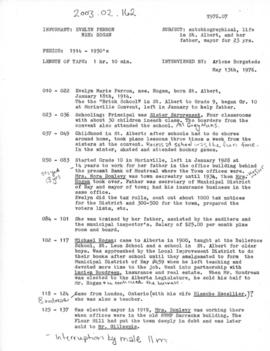 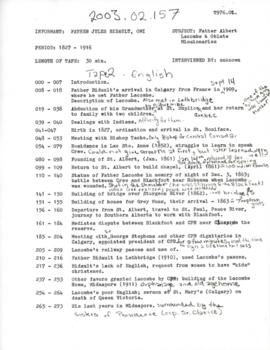 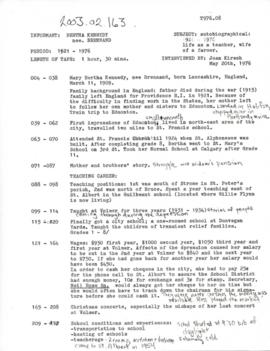 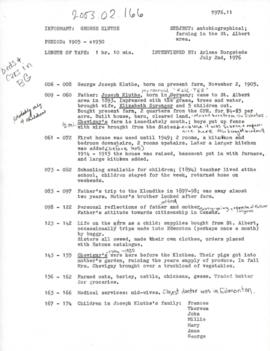 <p>In 1969, Father Colin Levangie, OMI recruited volunteers to update the displays at Musée Lacombe Museum which was established in 1929. One of the volunteers, Arlene Borgstede, directed two committees; one on the care of collections and the other on display work. The committee which cared for the collections was responsible for cataloguing and finding the provenance of artifacts which had no inventory. The ownership of the artifacts belonged to either the Oblates of Mary Immaculate or the Archdiocese of Edmonton. By 1971, the Father Lacombe Museum Board was formed to help administer the museum and the artifacts. At this point, Musée Lacombe Museum changed its name to Father Lacombe Museum. The Museum Board was incorporated in 1972 as the St. Albert Historical Society (SAHS) with Arlene Borgstede as president. The society was interested in managing, collecting and preserving materials related to the history of St. Albert as well as administering the Father Lacombe Museum and increasing public awareness of St. Albert's history. In 1975, SAHS hired a permanent Heritage Officer to coordinate museum work, conduct tours and answer reference requests. <p>SAHS was also responsible for the establishment of the Albert Lacombe Historical Foundation (ALHF) in 1977. The ALHF formed in response to the Oblates' plans to demolish Vital Grandin Centre, also known as the Bishop's Residence. ALHF's purpose was to sponsor, establish and administer a historical complex including Father Lacombe Chapel and Vital Grandin Centre on St. Albert's Mission Hill. In 1978, SAHS conducted a historical buildings inventory. Once the province designated Vital Grandin Centre a provincial historic site, the ALHF disbanded. From 1977 to 1983, SAHS administered the Father Lacombe Museum during the summer months under the auspices of Provincial Historic Sites. SAHS was responsible for hiring staff, managing programs, receiving money to administer the chapel and paying for operations. <p>In 1980, SAHS undertook a project to restore the bells on Mission hill. Father Émile Tardiff, OMI believed that the bells were cracked so he rested the bells in a stone frame in 1957. Later, it was discovered that the bells were out of tune and not cracked and as a project for Alberta's 75th anniversary, the bells were restored into a campanile. This restoration took place with the assistance of Canadian Pacific Railway and the federal government. <p>SAHS was extensively involved in the planning and development of St. Albert Place, the city's civic, cultural and administrative complex. In 1983 the Musée Héritage Museum was opened. SAHS gave Musée its small collection of artifacts and Musée had to treat those artifacts as loans. Care of the artifacts and exhibits became the responsibility of the new museum under the City of St. Albert. <p>In 1988, SAHS organized a Homecoming to have a reunion for significant and founding families and individuals of the community. With the homecoming, SAHS undertook a project called Founder's Walk. They laid out a shale walkway and plaques as well as planted trees to honour significant and founding families and peoples for St. Albert. The shale walkway was not maintained and, in 2006, the society initiated a project to make a new Founder's Walk. The City of St. Albert, SAHS and a number of stakeholders and funding contributors were involved in the project. The new Founder's Walk was completed in 2011 for St. Albert's 150th anniversary and resulted in historical panels, landscaping and a walkway to honour St. Albert's history. <p>SAHS was also involved in publications and much of their collection developed around their publishing activities. Their publications include St. Albert: A Pictorial History (1978), Black Robe's Vision: A History of St. Albert and District (1985), and A Week in the Life of St. Albert (1990). SAHS also created videos regarding St. Albert's History. In 2001, Then, Now and Forever was produced. <p>In 2011, the society undertook a Buffalo Hunt project to honour the buffalo hunt as a heritage activity that was crucial to the first settlers of St. Albert. According to the society, agriculture was not sufficient for the community to survive and the hunt was integral to the fecundicity of the community. The Buffalo Hunt project resulted in a statue erected on south-east corner of Sir Winston Churchill and Perron St. <p>SAHS was renamed St. Albert Heritage Society from 1998 to 2005, but returned to its original incorporated name in 2005. The aims of SAHS are currently to encourage an appreciation of the history of St. Albert by preserving and promoting the history of St. Albert and area.</p>

The assistant who originally arranged the oral histories for the Museé Héritage Museum took the files out of original order and filed them alphabetically. The archivist has placed the files in the order according to the St. Albert Historical Society numbering system.