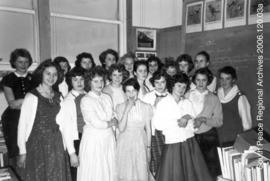 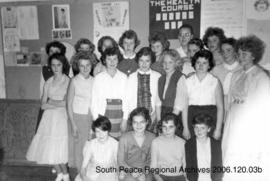 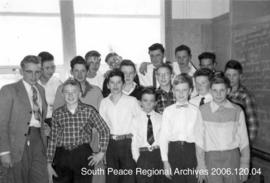 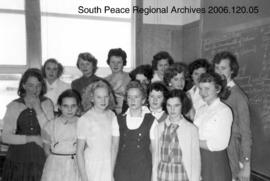 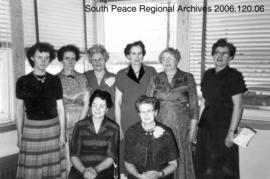 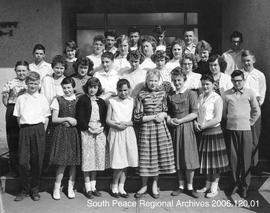 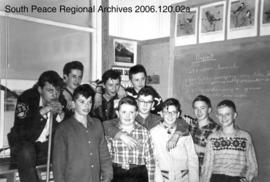 Paulette Pivert was born in the Wembley district to Andre and Jeanne Pivert, who had moved to the area in 1934. Andre was born in France in 1895, and as a teenager came to live with an uncle in Big Valley, Alberta. Jeanne was born in 1906 in Quebec but raised in Castor, AB, and met Andre at a community gathering there. They were married in 1928 and their first two children, Roland and Suzanne, were born in Big Valley. Andre's brothers, Maurice and Joe, told them about the Peace country and they moved there in 1934. Yvonne was born in 1935. At first they lived in Grande Prairie while Andre worked as a mechanic, but in 1939 moved to the farm at Millarston (south of Wembley) that Andre's cousin, Gaby Basly, was renting. They built on to the existing house to accommodate their growing family. In the summer of 1943 their twins, Paul and Paulette, were born. Roland, Suzanne and Yvonne attended Flying Shot Lake School, which was three miles northwest of their home. Lucky Tree School opened in time for Paul and Paulette. In 1950 the family bought a farm, the north half of 21-70-7-W6 with a log house on it. That fall Suzanne married Bill Carll and Roland joined the Armed Forces, later spending 15 months serving in the Korean War. Yvonne married Walter MacAlister in 1951. In 1963, Paulette married Colin Hrychiw from the Lake Saskatoon district and they made their home in Grande Prairie. They have four daughters, Colleen (1964), twins Karen and Glenda (1965), and Lynette (1971).

The records were donated over an extensive period of time, first to the Grande Prairie Museum and later to South Peace Regional Archives after it was formed in 2000.

The fonds consists of 20 photographs of some of the Pivert family and schools in the south Peace attended by the Pivert children the Pivert, paper artifacts and booklets relating to the activities of the Pivert family, newspaper articles and 3 blueprints about the Wapiti Coal Mines, a map of the County of Grande Prairie showing the location of the country schools, and some Greeting cards from the 1950s. There is also an article written by Paulette about her life-long interest in genealogy.

The records were donated over an extensive period of time, first to the Grande Prairie Museum and later to South Peace Regional Archives after it was formed in 2000.

A finding aid is available at http://southpeacearchives.org/paulette-hrychiw-fonds/