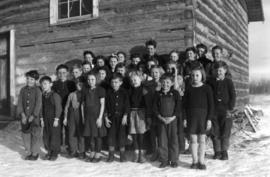 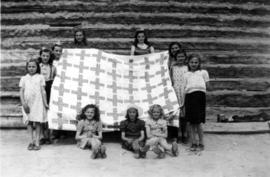 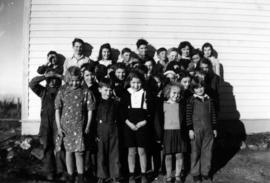 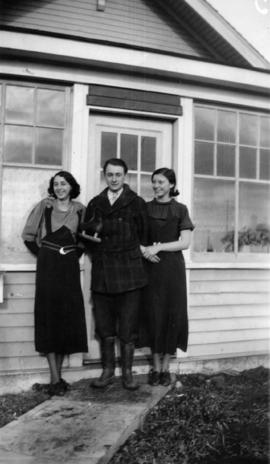 In the spring of 1926, John Hodges, Peggy's father, Jack Hodges, made up his mind to leave England and move his wife Ethel, and two small daughters, Peggy and Irene, to Canada. He had already travelled to Canada and lived in various parts of the country as a young man prior to World War 1. After serving in that war and with hard times threatening Britain due to a general strike, he decided to take advantage of the Soldier Settlement Board scheme and sail to Canada. The scheme allowed men who had served in the British forces to put up a sum of money and the Soldiers' Settlement Board would settle them on a quarter section of land in Canada, provide them with a furnished house and barn, a team of horses, a cow and farm implements. Each year the new farmer would pay the SSB a fixed sum. The young family boarded the Doric in late April, 1926, and after icebreakers cleared the way for them to land in Quebec, they boarded a train and arrived in Grande Prairie on May 6. They were met by representatives from the SSB who introduced them to Mrs. Tissington, who was to become their neighbor in the Flying Shot Lake district. Over the next year or so, other families settled in this district. What had been promised by the SSB in Britain didn't meet the family's expectations: the house was small, the furniture consisting of a tiny tin cookstove, a table with two chairs, and two iron bedsteads with straw filled mattresses. There was a barn and outhouse but no farm equipment or animals, so since it was planting time, Mr. Hodges had to work for a neighbor in return for planting his field of wheat. Mrs. Hodges, who had never been on a farm in her life, found adjusting to her new life difficult, left alone each day with the two small children. Six weeks after their arrival in the area, their two-year old girl became ill and died. Devastated at the loss, Mrs. Hodges was nevertheless grateful for the neighbor ladies who called and took her to town or W.M.S. meetings with them. The first winter, the family was forced to move into town where Jack worked for the railway crew. In 1929, the family gave up farming and moved into town, then later rented a number of different homes in the Flying Shot area. By 1933 they were permanently living in Grande Prairie. Ethel was an active member of the Women's Missionary Society of the Presbyterian Church. For a number of years in the 1930s, she also maintained the home for expectant mothers established by the Women's Institute. Jack Hodges died in 1953 and Ethel died in 1966. Peggy became a teacher, first in Webster and Flying Shot Lake Schools and continued to teach in Grande Prairie schools, particularly in Avondale. Her total teaching career spanned 44 years. She and Jim Mair were married in 1953 and had three children, Ian, Sylvia, and Irene. Jim Mair had come over from Scotland to work for McGavins Bakery and later worked for North Star Refinery as a boiler man until it closed down. The early 1960s were hard times with Jim out of work and Peggy looking after three small children, her ill mother who lived with them and only getting occasional subbing jobs. Jim was later hired by the highways department who took over the North Star refinery buildings. He died in 1984. Peggy continued teaching until 1989.

The records were donated to the Grande Prairie Regional Archives by Peggy Mair in 2004 and 2005.

The fonds consists of personal stories of Peggy’s childhood and early teaching career and 4 photographs.

The records were donated to the Grande Prairie Regional Archives by Peggy Mair in 2004 and 2005.

A finding aid is available at http://southpeacearchives.org/peggy-mair-fonds/