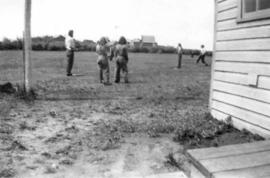 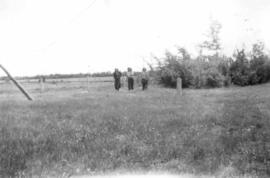 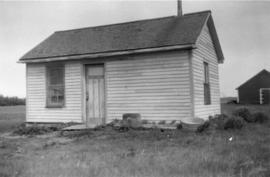 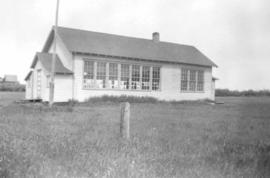 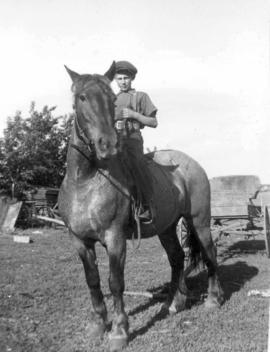 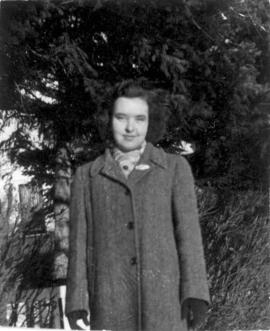 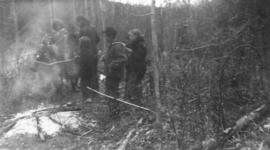 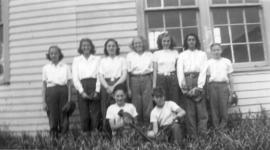 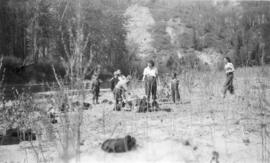 Phyllis Evelyn Mattoon was born in Consort, Alberta to Fred L. and Mabel Mattoon. Mrs. Mattoon was the first woman editor of a newspaper (the Consort Enterprise) in Alberta in 1913. Her daughter Phyllis completed teacher training during the war and came to the Bezanson area in May 1946 to teach at the Bezanson School. The Stewart family had arrived in the Bezanson area in 1912, coming in over the Edson Trail. George Alexander Stewart and his wife Sophia came from Sombre, Ontario with daughters May and Florence and sons Earl and Roy, and were later joined by son Charles H. and his wife Charlotte Thomas, also from Ontario. In 1923, the senior Stewarts moved to Detroit, Michigan along with Earl and Roy, leaving Charles H. on the farm in Bezanson. There were four children born to Lottie and Charles: Clara, George (Bud), Doris and Charles Bevan. In 1947 Phyllis married Charles Bevan Stewart. The young couple lived on his father's farm until they built their own residence on S.E. 35-71-3-W6 in 1949. They had four children: Cherry Lynn, Marvin Lee, Shannon Kelly, Creston Zane. Phyllis spent many years teaching in the East Smoky, High Prairie and County of Grande Prairie School Divisions, then completed a Bachelor of Education in 1976. The family also raised Montodale Sheep, which for a time was the only flock of this breed in Alberta. They traveled with their sheep to many fairs and exhibitions. Phyllis remained in the Bezanson area, in the family farm home, for well over 50 years. She was active in the community and in the Conservative party, and in 1983 she became a Councillor for the County of Grande Prairie, a position she held until 1992.

Records were collected from the home of George and Sophie Stewart, and the home of Charles & Phyllis Stewart and donated to the Grande Prairie Regional Archives in 2001.

The fonds consists of the records of farm and personal records of the Stewart family, musical scores belonging to the Mattoon family, Phyllis' career as a teacher, farmer, county councillor and member of the Conservative Party; and materials preserved and collected from Bezanson School District 3302. The photographs are mostly of school classes and events.

A finding aid is available at http://southpeacearchives.org/phyllis-stewart-fonds/