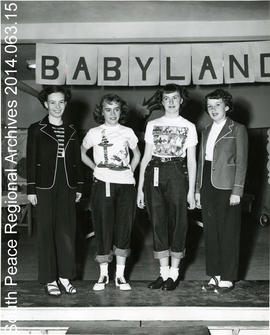 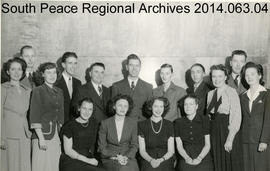 R.J. (Bob) Campbell was born March 17, 1915 in Makinak, Manitoba. He began his career with the Hudson's Bay Company in the Fur Trade Department as a junior clerk during the Great Depression. After about three years he was promoted to the position of Post Manager, which allowed him to marry his childhood sweetheart, Patricia Roach, of Winnipeg. His first Fur Trade Post was Dease Lake, BC, followed by Kitwanga, Fort St. James, and Fort St. John. His success in those postings resulted in his being appointed manager of the new store being built in Grande Prairie at the age of 33. The HBC supplied a house for the family on 98th Street, just north of Richmond Avenue.

When the Grande Prairie store opened in 1948, it was part of the HBC Fur Trade Division. According to Campbell's assistant, Hal Tipper: "Both Bob Campbell and I knew that the store we were about to open would be a far cry from the store folks in Grande Prairie were expecting. The gurus in Fur Trade Dept headquarters in Winnipeg envisioned a fur trade post, albeit a bit larger than normal. Grande Prairieites envisioned the Edmonton Bay store, albeit a bit smaller. Bob Campbell, and to some extent myself, were continually frustrated by our inability to give folks the store they were expecting. Our inititial inventory included dog sleds, dog harness and horse collars, along with traps, rifles and ammunition. The rifles and ammunition sold well as at that time (post war), supplies were still scarce. Little by little we transformed the store, ignoring for the most part the Fur Trade Dept Merchandise Depot in Winnipeg and dealing with more normal suppliers. I believe it was 1950 when management accepted the fact that trying to operate Grande Prairie as a Fur Trade Post was an error and moved our store into what was then called the 'Inland Stores Division'."

Bob Campbell left the Hudson's Bay Company ca. 1951, becoming a commission agent for a bulk fuel agency. Around 1952 he purchased Pete Butchart's flower shop on Richmond Avenue, on the north side of the avenue and just west of 101 Street. He re-named it Campbell Flowers;two generations of the family were in business with it for many years.

The records were deposited by Harold V. (Hal) Tipper, the assistant administrator to R.J. Campbell in 1948. Hal began his career with the HBC at the Yellowknife Store--Fur Trade Department in 1946 and was appointed assistant manager of the new Fur Trade Department Grande Prairie when he was only 20 years old. When Bob Campbell passed away in 2000, these records were passed on to Mr. Tipper by the Campbell family.

The fonds consists of 15 photographs, an Employment Agreement between the Hudson's Bay Company and R J Campbell, and a magazine clipping photo of R J Campbell. The photographs are of the Hudson's Bay Company Store in Grande Prairie when it opened in 1948, the original staff group in 1948, 4 photos of the crowds on opening day, 2 photos of a children's fashion show on opening day, and 5 photographs of the HBC Company float for the opening of the Smoky River bridge.

These records were donated to South Peace Regional Archives by Harold Tipper, assistant administrator to R.J. Campbell in 1948, on August 1, 2014.

A finding aid is available at http://southpeacearchives.org/fonds-585-rj-campbell-fonds/