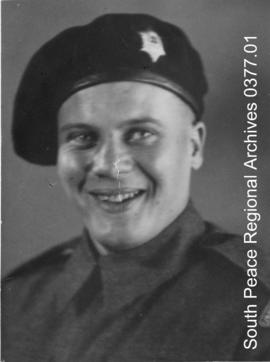 Reuben Erland Young was born on October 11, 1918 to Esther and Victor Young, who had both emigrated from Sweden to Minnesota, where they met and married. They had six children born to them in Minnesota: Beatrice, William, Hazel, Axel, Harold and Edna. Hazel died in infancy and two-year old William at that same time. In 1915, with the four remaining children, the Youngs moved to Canada and homesteaded in the Broncho Creek district near Spirit River. Five more children were born there: Ruth, Reuben, Harry, Violet and Lillian. Harold died in 1921, when he was about 8 years old, Edna (one of the first three stewardesses with Yukon Southern Airlines which later became CPA) lost her life in a plane crash in December 1942, and Harry committed suicide in 1946. Reuben attended school at Broncho Creek, but did not go on to high school. When World War II began, he joined the army in the Governor General's Foot Guards. He was killed in action at a battle on the border of Belgium and Holland, in the province of North Brabent, on October 21, 1944. He was buried in a temporary grave just north of the village of Putte, but later re-buried in the Bergen-op-zoom Canadian War Cemetery. His part in World War II is recorded in the book, Terrible Victory: "First Canadian Army and the Scheldt Estuary Campaign:" "...A self-propelled gun opened up from a concealed position and punched a hole through the turret of Sergeant T.B. Murray's tank. Guardsmen Reuben Erland Young and Dan Alexander Kozar were killed and Murray was wounded."

Copies of the letter and photograph were given to relatives including cousin Nora Babuik, who preserved them and donated them to South Peace Regional Archives in 2009.

The fonds consists of a 1943 World War II photograph of Reuben Erland Young taken by Renfield Studios in Glasgow, Scotland; and a copy of the letter written to Reuben's mother, Esther Young, by Sgt. B. Murray after his death.

Copies of the letter and photograph were given to relatives including cousin Nora Babuik, who preserved them and donated them to South Peace Regional Archives in 2009.

A finding aid is available at http://southpeacearchives.org/reuben-young/