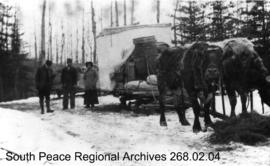 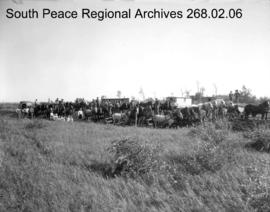 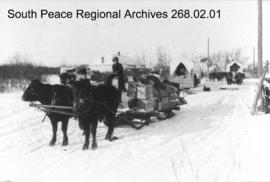 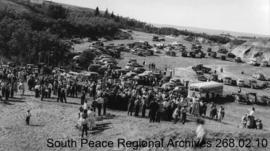 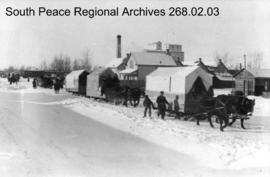 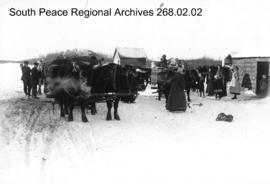 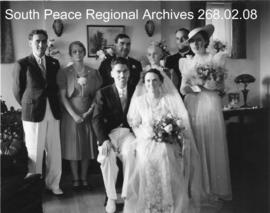 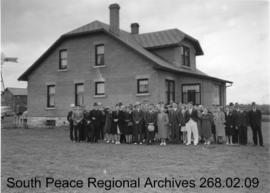 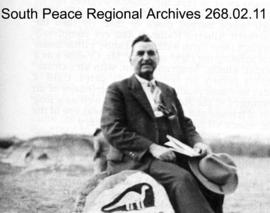 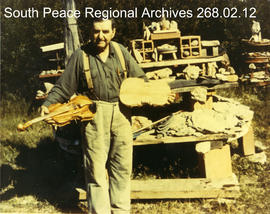 The Cochrane family came to Canada in 1852. Robert was born in 1880 in Kippen, Ontario, one of 3 boys and seven girls and was engaged in carpenter work before he moved west. His future wife, Jennie Agar was born in Huron County, Ontario. The two were married in 1906, while Robert was in North Dakota, and soon after moved to Winnipeg. In 1910, they travelled to Grande Prairie in the Peace country over the Long Trail via Peace River with Mr. and Mrs. James Moore and son. Robert returned to Grouard to file for the land and then returned to Edmonton. Mr. Cochrane had selected four quarters of South African script, (N1/2 13&14 -72-5 W6 and S1/2 13&14 -72-5-W6). He had obtained South African script for 8 quarters through a fortunate Winnipeg investment. In February 1911, using four outfits of oxen, one driven by a reluctant Mrs. Cochrane, they travelled with Mrs. Cochrane's brother, Stanley Agar, the Robert Moores, the Dr. Bradford family, Jack Shortreed, and Joe McLaughlin. They brought in furniture, grubstake, equipment, implements, stock feed, and a load of Banner seed oats and hay to start what became a 1400 acre farm. They learned their party was too large to be accommodated at stopping places on the trail, so they had to split up. On April 7, 2011, the Cochranes were able to clear a space on their land near Kleskun Hill and set up their caboose as shelter. Cochrane had arranged for 20 acres to be broken the previous fall so in the spring of 1911 he planted his Banner oats and broke another 80 acres. He constructed a harrow to work his first crop. He built a better cabin first and then a frame house later in the summer. He also worked on the construction of the McQueen Presbyterian Church that first year. Before their first daughter, Ruth, was born, a fire destroyed their log cabin and the couple considered returning to Ontario, but the community rallied and helped them establish a new home. Over the next years, Robert handled native lumber for the Cooke & Boyd sawmill on the Smoky east of Kleskun Hill. He traded the lumber to farmers for oats which Cook and Boyd then sold for cash to the railway crews who were working their teams near Watino. Robert constructed the Kleskun Lake School including desks (where his sister-in-law Edna Agar taught until 1917). Other achievements over the years included helping form the first agricultural society and the Peace River Grain Club, organizing the Peace River Co-operative Seed Growers Ltd. and becoming its president in 1928, being named the Timothy King of the Empire in 1932, having supplied seed houses with more timothy than any other individual in the British Commonwealth, and becoming World Wheat King for his Saunders wheat at the Toronto Royal Winter Fair in 1955. Robert was an amateur conservationist and naturalist and became an authority on prehistoric fossils, assembling a collection of thousands of fossils and bones, many found in the Kleskun Hills. Through his efforts, the Kleskun Hills Geological Park was created in 1946.The Cochranes had one son, James and two daughters, Ruth (Mrs. Walter Atkins) of Toronto, and Jean (Mrs. Gordon Forbes) of Edmonton. Jennie Cochrane died in 1961 and Robert Cochrane died in 1965 at the age of 85. Their son, James, also died in 1965.

The records were deposited in South Peace Regional Archives in 2007, 2009, and 2012 by Robert Cochrane Jr., grandson of the Robert Cochrane who is the creator of this fonds.

The fonds consists of correspondence, seed registration certificates, award and honours, a scrapbook and newspaper clippings, an interview and historical notes, photographs of family and community interest, and booklets about the history of Grande Prairie and area.

The fonds is divided into three series: Personal Papers, Photographs, and Booklets. It has been arranged by the Archivist by record type, then chronologically.

The records were deposited in South Peace Regional Archives in 2007, 2009, and 2012 by Robert Cochrane Jr., grandson of the Robert Cochrane who is the creator of this fonds.

A finding aid is available at http://southpeacearchives.org/robert-cochrane-fonds/