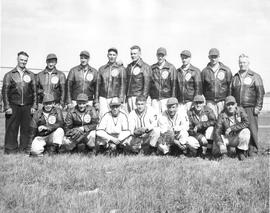 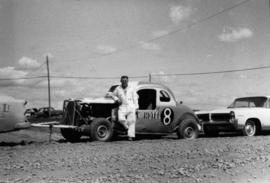 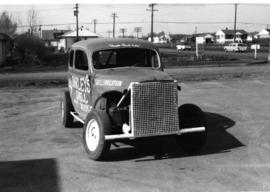 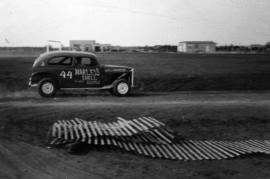 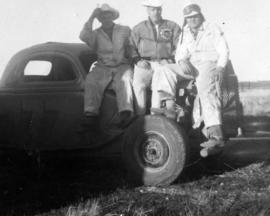 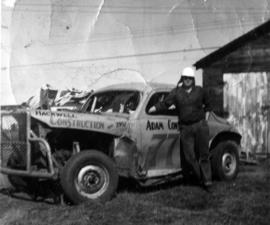 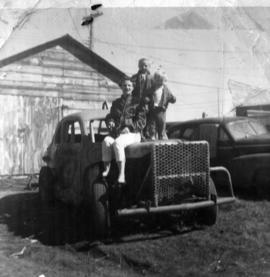 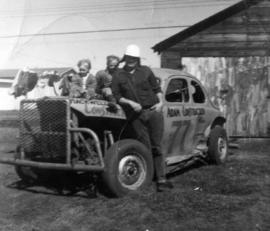 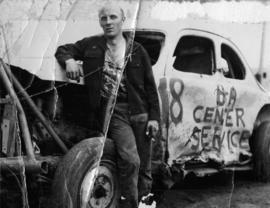 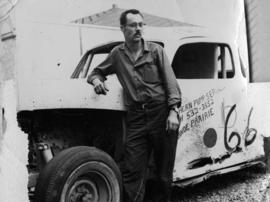 Melvin Rodacker was born in Lumby B.C. in 1909 and moved with his family to Peoria, AB, at an early age. He arrived in Grande Prairie in 1927. He worked on the railroad in his early days, then was the J.I. Case farm implement dealer during the 1930s-50s. Next he ran the Dominion Royal Tire Shop in the 1940s, 50s, 60s, and also founded the Rodacker Machine Works which became Steel Industries. From the 1940s-1970s he established Rodacker Sales and Service, the Ford/Lincoln dealership, located on the corner of 101 Ave. and 101 St. He was also the Tilden car rental franchise holder for 13 years. Mel was very active in the community: a charter member of the Kinsmen Club and later the K-40 Club. He also belonged to the Shriners Club, the Lake Saskatoon Masonic Lodge and was at one time President of the Curling Club, the Grande Prairie Athletic Association, the Grande Prairie Chamber of Commerce, and the Grande Prairie Museum. He played with the Grande Prairie Marching Band in the 1930s and led a musical group called Mel Rodacker's Old Timers in the 1930s-1940s which played over CFGP radio intermittently for over ten years, and then founded the Rhythym Knights in the 1950s. He played for and sponsored a senior fastball team, the Case Eagles in the 1930s. He managed and sponsored the Grande Prairie Mercury Baseball Team in the 1950s as well as the Grande Prairie Athletics hockey team. He also sponsored and help build the Model T Ford racer that careened around the tracks in the region in the 1940s. His community service included a term on town council in the 1940s, chairmanship of the Chamber committee that was instrumental in lobbying for the construction of the Great Slave Lake Railway from Peace River to Pine Point, NWT. In his later years, he chaired the committee which launched the Pioneer Museum in Grande Prairie and this led to a decade of involvement with its operation including several terms as president of the museum society. Mel died in 1980 and was survived by his wife, Phyllis, son Wayne and brothers Bill, Dan, Harold, Henry, Manuel and sisters Lil. Abbie, and Viola.

The records were donated to the South Peace Regional Archives by Wayne Rodacker in 2007 and 2008.

The fonds consists of 58 photographs; 3 certificates relating to Mel's involment with the Kinsmen, Chamber of Commerce and the Shriners; copies of documents describing Rodacker's Sales and Service with a collection of advertising cards; copies of news articles showing his involvement with Stock Car Racing; a get-well card signed by the members of the Red Devils hockey team; and an original document signed by guarantors agreeing to pay for the cost of a special train trip to bring Grande Prairie's Senior Hockey Team from Rycroft to Hythe for a league game; a map of the County of Grande Prairie showing land ownership, and a copy of Mel's obituary.

The records were donated to the South Peace Regional Archives by Wayne Rodacker in 2007 and 2008.

A finding aid is available at http://southpeacearchives.org/rodacker-family-fonds/