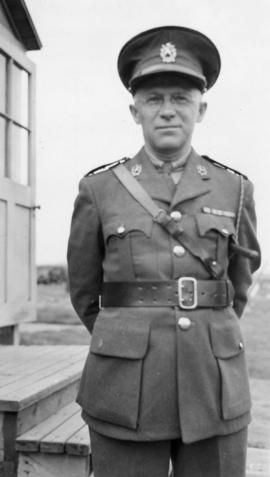 On January 21, 1936, a group of returned men gathered at the home of A.E. Powers for the purpose of forming a local branch of the Royal Canadian Legion. Temporary officers appointed pending the receiving of a charter were President J.P. Sauve, VP Harold Moulton, and Secretary Allan Powers. Other members present were Ted McDaid, Louis Peterson, Tony Desgagne and Xavier Lamothe. This branch also referred to themselves as "The Returned Men's Association" and held regular monthly meetings. They organized dances, planned Remembrance Day activities, and even raised money to send local children to Edmonton for the Royal Visit in 1939. There is, however, no record of any charter for this group, and it appears to have disbanded during World War II. On September 8, 1947, a formal branch of the Royal Canadian Legion was formed for the three districts of Watino, Tangent and Eaglesham. Branch 235 was named in memory of J.P. Sauve MM, who did the groundwork for the branch but was killed in an accident before the charter was obtained. Regular meetings, socials and dances raised money for community projects. In the late 40s and early 50s, their numbers were swelled by a large number of Veterans who settled in the Lassiter Project, so the Branch bought a lot in Eaglesham and moved Ray Emerson's old house into town. This was called the Legion Hut, and both the Legion and Legion Auxiliary (formed in 1952) held their meetings there, as well as regular events such as the annual Christmas Party for veteran's children. The hall was also used for many other community purposes such as health clinics, school events, and clubs. In 1947-48, membership in Sauve Branch 235 reached 200. The club regularly won awards for increasing memberships more than 6% in a year. They raised money first through holding bingos, and in the 1970s, began selling Sweepstake tickets, Lucky Sevens, Western Canadian Lottery, Provincial and Nevada tickets. They accomplished a great deal through their fundraising, starting with $500 to build a community hall. They also donated to the Polio fund and sponsored Boy Scouts, Girl Guides, and juvenile hockey teams. The Legion involved themselves in the community in pratical ways as well. In 1952, they began holding a community picnic each year at different farms. In 1954, they assumed responsibility for the local curling rink by mortgaging their own Legion property and raising donations from local businesses and donated grain hauled to the local elevator. Soon they had added a hockey rink beside the curling rink with volunteer labor, and in 1958 took over the organization of the July 1st Sports Day. The rink, named the "Eaglesham Memorial Curling Rink", was sold back to the community for $1.00 in 1962. At this point, the club was low in funds and down to 34 members. They gave the now-delapidated clubhouse to a veteran to be moved to his farm and raffled off the lot. For several years they held meetings in basements. Then, in 1976 they entered a joint project with the Senior Citizens Social Club. Property was purchased and a combined club hall built, with the Legion owning 25% of the property and assets. Now they could offer lawn bowling, a pool table, a billiard table, a shuffle board, a 16 mm projector and weekly movies. They supported the Centre with weekly Friday night bingos and the sale of Nevada tickets. In 1978, the Branch erected a cenotaph in the park in Eaglesham. It is built of rocks from the Peace River and sand from the Smoky River. It was officially unveiled September 11, 1978 with members from the Legislative Assembley in attendance. In 1980, a memorial plaque was unveiled at the Centre. The Branch also has a field of honour in the Eaglesham Cemetery where a number of Veterans are interred. Royal Canadian Legion Sauve Branch 235 operated until 2003, and surrendered its charter on December 31, 2003.

The records were deposited in South Peace Regional Archives by Morris Burroughs in 2006.

The fonds consists of legal documents and the written history of the organization, meeting minutes, membership records, activity files, financial records, correspondence and material relating to associated organizations. There is one photograph of Lieutenant J.P. Sauve M.M., after whom this branch of the Royal Canadian Legion is named.

The records were donated to the South Peace Regional Archives by Morris Burroughs in 2007.

A finding aid is available at http://southpeacearchives.org/royal-canadian-legion-sauve-branch-235-eaglesham/