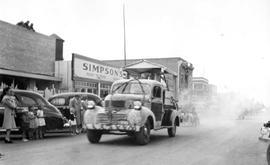 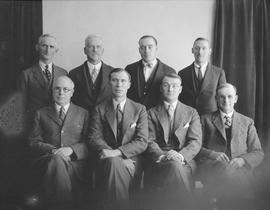 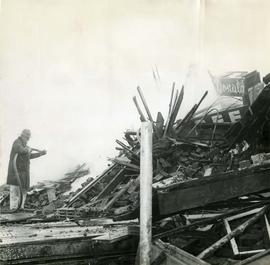 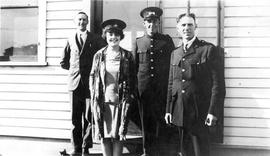 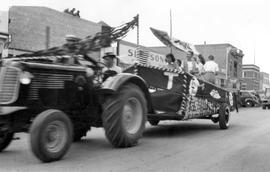 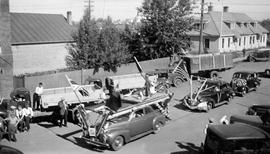 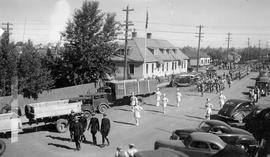 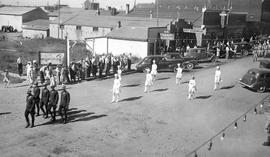 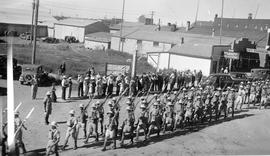 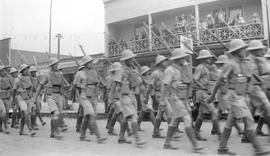 Clarence Russell was born June 4, 1905, in Lion's Head (Bruce County), Ontario. In 1909, he came west to High River, Alberta, with his parents, Alexander and Jennie (Cameron) Burgess. In 1928, he came to Grande Prairie, followed by Pearl Munkholm, also of High River. They were married March 29, 1929. They had three children, Robert, Kenneth and Kathleen. Russell originally planned on homesteading in the Fort St. John area but it seemed too far away from everything so he came back to Grande Prairie. By this time he was broke so went to work for a meal ticket for Mr. Wong who owned the Windsor Café. He also worked making ice for the rink and then worked for the town, first as a town policeman and then as works foreman. In 1934 he went to work for the provincial government on bridge building crews all over the province. He then worked for Union Tractor for two years, became ill and took up lock smithing as a hobby. He also became a licensed electrician and went to work for Cookshaw Electric where he stayed until 1965. In his retirement he maintained a large stamp collection and a woodworking shop. He died in 1991.

The fonds consists of 32 photographs, 1 souvenir issue of The Daily Herald Tribune featuring a Grande Prairie High School reunion in 1979; a program from the fourth Soap Box Derby in Dawson Creek in 1956, an obituary card for Russell Burgess and 20 membership cards belonging to C.R. Burgess. An accrual contained 2 ration booklets, a Dept. of Public WorksTime Book, a trade certificate, 3 electrician certificates, a radio licence, vehicle and voter registrations, insurance card and driver's licences, receipts, lists of toys, letters from his sister, Doris and his friends John Hendren and George Cave, and membership cards belonging to Russell Burgess. Also included are a scrap book of WWII clippings, 2 notebooks (Art and Chemistry) and a 1945 GPHS Yearbook belonging to Robert (Bob) Burgess.

A finding aid is available at http://southpeacearchives.org/russell-burgess-family-fonds/