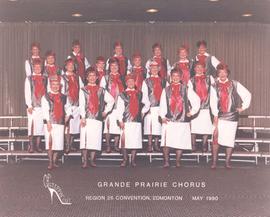 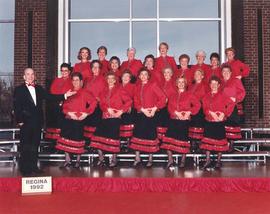 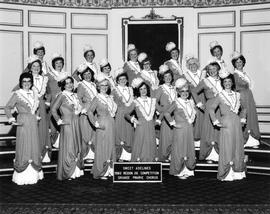 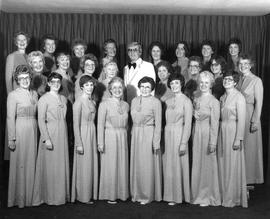 In 1976, a Grande Prairie Chapter of the Sweet Adelines was initiated by Jean Duffy, who had been a member of a chapter in Edmonton but was now resident in Grande Prairie. By 1980, the group was a member of the International Sweet Adelines. To earn a chapter, the group had to have 20 members and prove, via singing competitions, that they had mastered the unique Barbershop style and sound. They also had to show that they could organize events and portray the proper Sweet Adelines image and standards, as well as raise the funds to cover the costs of instructors, equipment, costumes and travel. Over the 19 years for which they existed, the club provided entertainment for the community as a service or in fund-raising concerts and participated in local events such as the County Parade and the Festival of Carols. They especially enjoyed singing in senior citizens' lodges. As a chapter, they performed at regional competitions, attended other competitions in the States and Canada, and even sent some members to international conventions. The group swelled to a total of 28 members, but dwindled in the early 1990s. In 1994, with a membership of 12, funding and members became increasingly difficult to attract. The chapter dissolved in 1995.

The fonds consist of Chapter Thirteen’s certificate of incorporation; minutes; history scrapbooks of both the prospective chapter from 1976 to 1979 and of Chapter 13 from 1980 to 1988 which include photographs of their events and singing competitions; and group portraits.

A finding aid is available at http://southpeacearchives.org/sweet-adelines-fonds/