Fonds TW - The Tuning of the World Conference fonds 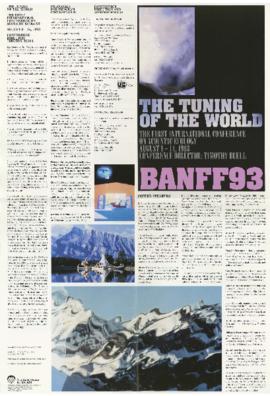 The Tuning of the World Conference fonds

The Tuning of the World Conference

The Tuning of the World was an international and interdisciplinary conference that took place between August 6th-29th 1993 at Banff Centre. The conference was concerned with acoustic ecology, namely: the relationship between sound and the environment. The conference was co-sponsored by Banff Centre and the University of Calgary and consisted of exhibitions, performances, lectures, and panel discussions. Artistic events were interspersed within the conference program, with a number of performances taking place in the natural environment of Banff National Park. Among these featured a performance of R. Murray Schafer's ritual outdoor opera, "The Princess of the Stars," which took place during sunrise at a mountain lake, with archetypal characters represented by giant canoe-driven puppets. The conference represented the culmination of the R. Murray Schafer's World Soundscape Project, initiated nearly twenty-five years earlier at Simon Fraser University. Exhibitions at the Nickle Arts Museum, curated by Katherine Ylitalo, ran contiguously from August 6th to 29th. Conference participants included, but were not limited to: R. Murray Schafer, Ursula Franklin, Louis Dandrel, Marisa Fonterrada, Pauline Oliveros, Victor Flusser, Violeta Hemsy de Gainza, Steve Feld, Hildegard Westerkamp, David Lowenthal, and Edward Poitras. Major contributors to the conference included the Government of Canada's Cultural Initiatives Program and Monique Landry, Secretary of State of Canada and Minister of Communications. The conference received further support from the University of Calgary, Social Sciences and Humanities Research Council of Canada, the Alberta Foundation for the Arts, The Rex Foundation, and the Calgary Region Arts Foundation. Timothy Buell served as the Conference Director; Carol Holmes as the Conference Coordinator; Gerald Rex Luthy as the Conference Manager, with technical support from Arnold Brookhaus and Martin Finnerty.

The fonds consists of material relating to the planning and proceedings of The Tuning of the World conference. The fonds is divided into five series which reflect the many items found in the fonds. materials in this fonds include procedural files including correspondence, budgets, reports, and planning documents belonging to Tuning of the World Conference Director Timothy Buell and Conference Administrator Annie Hillis. The fonds also includes photographs and recordings relevant to the conference.

The records were created by the Banff Centre and transferred to the Archives by the Tuning of the World conference administration after the event.

Arrangement imposed by the archivist. Only the archival material in the donation was preserved. Contact the Archives for a full listing of the material that arrived with the donation.

Only some material in the fonds has been digitized. Please contact Banff Centre Archives to explore the whole fonds. If unannotated, duplicates were removed.