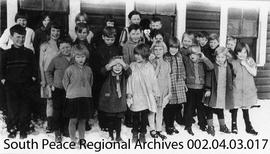 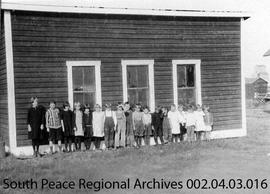 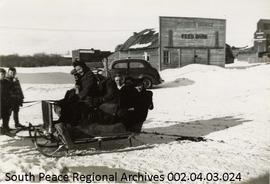 "Turn Back the Pages"

Turn Back the Pages: Clairmont 1908-1992 is the history of the community of Clairmont (originally called Twin Lakes) written by Beth Sheehan in 1992. The book contains the history of the hamlet/village and its schools, churches, organizations and sports, illustrated by stories of local characters, maps, photographs, art work and clippings from the Clairmont Independent newspaper.The sub-series consists of the research files (including people, government, businesses, events) used to create the original book, newsclipping files for Clairmont from 2011-1908, the 1992 manuscript of the book “Turn Back the Pages”, and a file for the update of the book, dated 1999-2005. There is also a 20 page document from the Provincial Archives of Alberta detailing all the records with material about Clairmont in their holdings, a hand-out on How to Prepare a Local History by Hugh Dempsey, and a copy of the published book. The photographs in this sub-series are dated from 1915-2004, and record the changes in the hamlet in almost 90 years. They include early hamlet scenes, farm buildings, schools and children, the Krimmer Mennonite congregation and the cemetery; and the buildings, businesses, homes and street scenes in the town and country, and views from outside of Clairmont as the area became more developed.