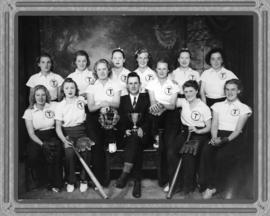 In 1928 several families with school age children moved into the area 6.5 miles north-east of Grande Prairie. Kleskun Lake School was too far north and Five Mile Creek to the south was full to capacity. A new school district was formed and a new school named Twilight was opened January 1, 1930. One of the popular school activities was softball and the children became quite good at it. So good in fact, that in 1937, a competitive ladies softball team came to life. The girls financed their equipment by picking raspberries which they traded to Porteous Hardware for bats and balls. By 1939, Mr. Gerald Carveth, an ex-baseball player living in the district, was invited to coach the team. Twilight was a very small district so girls from Kleskun Lake and Five Mile Creek were needed to fill the roster and provide extra strength. Grande Prairie, Wembley and Lake Saskatoon were the competition. The Reynolds Challenge was the trophy. Wembley won the Reynolds Cup in 1937 and 1938. Reynolds Tobacco donated the cup in 1937 after G.V. Carveth met Mr. Reynolds on a flight to Toronto, and Mr. Reynolds offered the cup after hearing about the team. With Betty Carveth and Elva Evans pitching and Emily Marek catching and nine other girls for fielding support, Twilight won the cup for their first time in 1939. Twilight ladies went on to win the Reynolds Cup consecutively until 1944 when there was no room on the pedestal for more crests. From the season opener in 1939 until August, 1942, the Twilight Ladies Softball team had won 41 cosecutive games and held supremacy over teams from Grande Prairie, Dawson Creek, Spirit River, Rycroft, and Peace River. Mr. Caveth and Mr. Wendt supplied gas for transportation to the games. At Army Week, 1942, at "D" Company Armories in Grande Prairie, Twilight was defeated by Halcourt by a score of 8 to 7, thus terminating their long string of victories. The team was considerably weakened in 1943 by ace pitcher Betty Carveth going to the Edmonton Walkrites team and skilled catcher Emily Marek going into the Army, plus other girls moving on to jobs or marriage. However, the 1946 team records show Twi; ight winning 24 of the 30 games they played under the coaching of Mr. Herman Wendt. The team disbanded after the 1949 season, completing 12 years of successful Twilight Ladies Softball. Twilight School closed in 1950 and the children were bussed to Grande Prairie under new school division regulations.

The records were collected by Eleanor (Oatway)Harrison and donated to the archives June 13, 2003.

The fonds consists of a photograph of the Twilight Ladies Softball Team , 1940, and 1 page recording the team's history.

The records were collected by Eleanor (Oatway)Harrison and donated to the archives June 13, 2003.

A finding aid is available at http://southpeacearchives.org/twilight-ladies-softball-league/

The Reynolds Cup is located in the Grande Prairie Museum