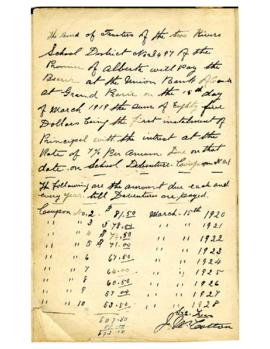 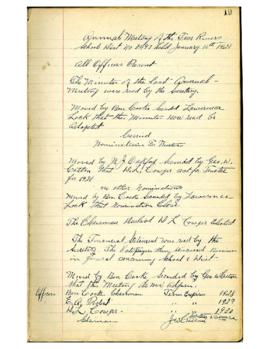 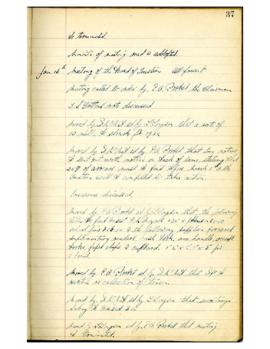 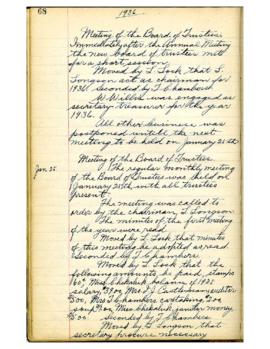 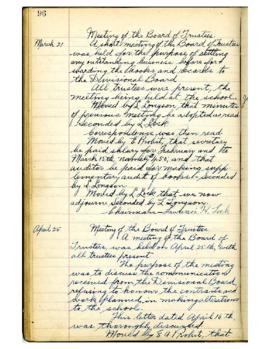 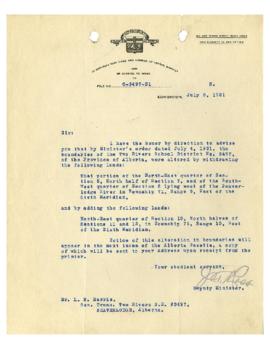 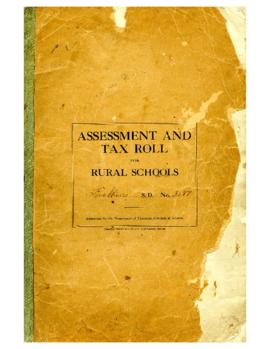 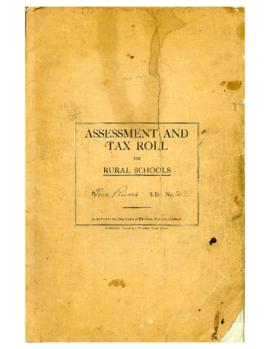 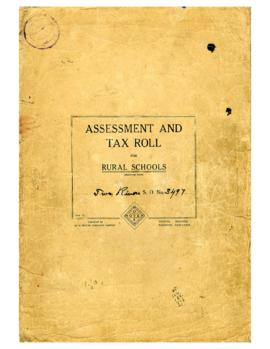 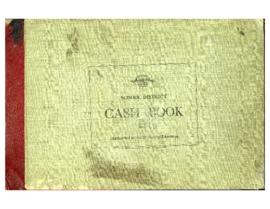 Two Rivers school was formed in 1917 and was named after its location in the triangle formed by the joining of the Red Willow and Beaverlodge Rivers. The school was built on the southwest corner of SE1-71-10-W6 and was originally 18'x26', although from 1917 to 1918 the school operated from J.W. Cotton's house (SE 35-70-10), with Verna Elliot as the first teacher. The first three elected trustees of the school were Chairman M.H. Whistler, D.W. Chambers and R.J. Adams, with J.W. Cotton hired as the Secretary Treasurer. Because of low student attendance and greater than anticipated costs, the school closed in 1918 and did not reopen again until 1927. The school closed again for about a month in 1929 due to an outbreak of smallpox. In 1927, Miss Rita Cleland was the teacher. In 1936, Two Rivers began to provide grade 9 instruction and Miss Kae Chekaluk, the teacher at the time, received a salary increase. Teachers at Two Rivers School had to board with local residents until 1942, when Mrs. Isabel Perry had her house moved from Appleton to the Two Rivers school grounds. Mrs. Perry's house became the teacherage for the remainder of the operation of the school. Teaching in rural Alberta in the early to mid 1900's had many challenges. Teachers often had to wait long periods of time before receiving their salaries, and many teachers at Two Rivers also had to perform janitorial duties and haul water. From 1946 to 1948, because of teacher shortages, William Taylor was hired as a supervisor and Two Rivers students did their lessons through correspondence. In 1933 trees were planted near the school in order to create a windbreak, and a barn was also built on the school property this year. In 1938, Two Rivers joined the Grande Prairie District, although the school remained very independent. Two Rivers purchased a typewriter and radio for their school in 1938, and they also submitted a proposal for improvements to the school to the Grande Prairie Divisional board. The Board rejected their proposal, but this did not stop Two Rivers. Using volunteer labour and donations, the school financed improvements to the school themselves. With only $21 in financial assistance from the Grande Prairie board, Two Rivers managed to turn the school so that its windows faced east, placed the school on a cement foundation, and gave the building new siding and paint. The 1938 improvements to Two Rivers School is not the only instance where the community played a major role in maintaining and improving the school. Throughout the school's history, men from the area worked to improve the grounds, and because getting water to the school was a problem, men from the area, as well as the teacher and pupils, had to haul water to the school. In 1940, the local telephone company donated and installed a telephone at Two Rivers School. Like most rural schools, Two Rivers was the center of the community. Christmas concerts, which included plays, recitations, carols, a Christmas tree and gifts, were attended by the entire community and they often involved months of practice on the part of the teacher and students. End of the year school picnics were also a major highlight of the school year. The picnics were often held at the Old Ford along Beaverlodge River, families brought lunches, homemade ice-cream and lemonade and there were races, ball games and swimming. While Miss Doris Vernon was teacher at Two Rivers (she taught from 1937 to 1939) the school put-on a fundraising concert, the proceeds from which were used to purchase a piano for the school. In 1942, Mrs. Isabel Perry, the teacher of Two Rivers at this time, moved her house from Appleton onto the school grounds, and this became the school teacherage for the remainder of the time the school operated. In 1947, because of an increase in student numbers, cloak rooms and an addition was added to the south end of the school building. Because of declining student numbers (due to the centralization trend), the school closed in 1953 although the school continued to be used for community events until 1965. In 1978, the Two Rivers district donated the school to the South Peace Centennial Museum.

The records were donated to the South Peace Regional Archives by Allan Lock in 2008.

The fonds consists of documents relating to the operation of Two Rivers School District 3497. Included in this collection are executive records, assessment and taxation books and financial records, as well as student censuses and daily registers. Also included are documents relating to personnel, curriculum and school activities, supplies and operations; and files of correspondence between Two Rivers School District and the Grande Prairie School Division, the Department of Education and the Department of Municipal Affairs. Printed matter includes the 1937 School Act, Financial Statements from Grande Prairie School Division 14, and issues of the Alberta School Trustee.

The records were donated to the South Peace Regional Archives by Allan Lock in 2008.

A finding aid is available at http://southpeacearchives.org/two-rivers-school-district-3497/

Information for Agency History taken from Allan Lock's account of Two Rivers School in North Red Willow School Reunion Book and Doreen Longson's account of the school in the book Beaverlodge to the Rockies.