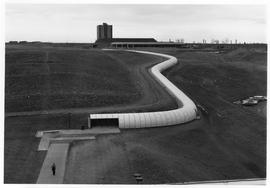 The collection consists of reports and plans for the University of Lethbridge site and for specific buildings.

No restrictions on material.