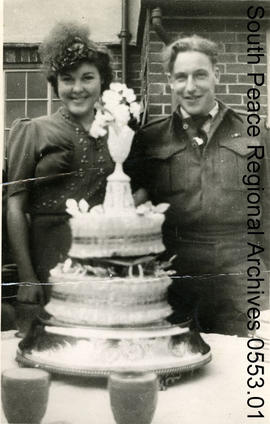 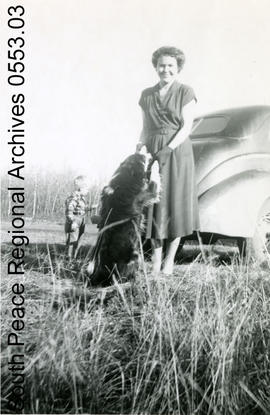 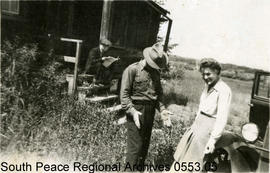 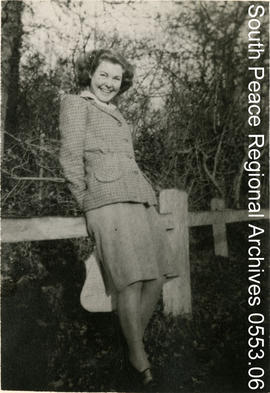 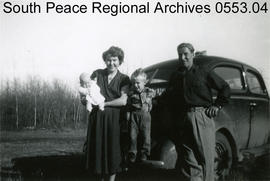 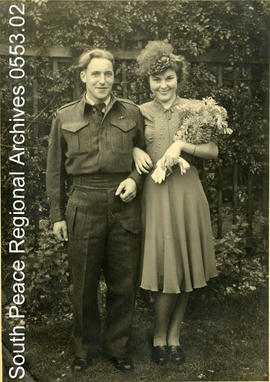 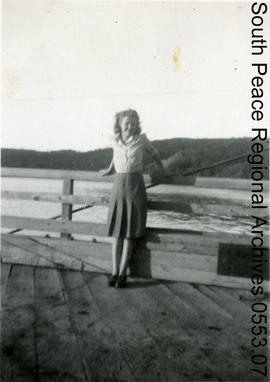 Violet Remnant was a 16 year old shop assistant in Wrecclesham, Surrey, not far from the Canadian Army Base in Aldershot, when she first met Arnold Dryer at a dance in the village hall. Arnold's squadron was billeted nearby in the Village of Rowledge. When his squadron moved, they began a correspondence which lasted throughout the war.

At 18, Vi joined the Air Force, working as a clerk in RAF records in Gloucestershire. When the war ended, they were afraid that Arnold would be drafted home, so with four days notice they planned a wedding. Vi purchased a royal blue dress for her wedding and a tweed going-away suit with clothing coupons because war rations were still on. Her mother used her coupons to buy Arnold some dress shoes because all he had was army boots.

After the marriage, Arnold was indeed sent back to Canada, and he returned to farming in the Hermit Lake area west of Grande Prairie. Vi waited for permission from the Canadian Wives Bureau to join him. She was discharged from the Air Force and put in time helping at the local post office. She had to be ready to go with only a couple of days notice.

In June 1946 she sailed on the Aquatania with another bride bound for Grande Prairie, Betty Eskdale. Her sister-in-law, Mrs. Robert Dryer, sailed at the same time, but on a ship of wives with babies. The war brides were processed through immigration at Pier 21 in Halifax, and from there took a train across Canada. Vi arrived in Grande Prairie on July 4th, to be greeted by the entire Dryer family.

The event was recorded by the Daily Herald-Tribune with a front page article with the headline, "Three War Brides Arrive in Grande Prairie." Neighbours also welcomed the bride with a wedding shower, and the young couple settled down to farming in the Peace Country. Although Vi was "homesick off and on" over the next year, she enjoyed farm life and the many good neighbours.

The fonds consists of stories told by Violet for the War Brides project in 2006 and the 2013 Film & Story Tea. There are also seven photographs of Vi in her wedding dress and going-away suit over the years; 6 pp from a small notebook showing what she packed to travel to Canada, and detailing her expenses; and a copy of a newspaper clipping with the headline, "Three War Brides Arrive in Grande Prairie."

A finding aid is available at http://southpeacearchives.org/finding-aids/fonds-553-violet-dryer/