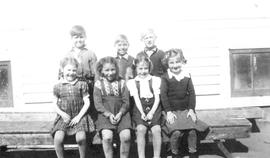 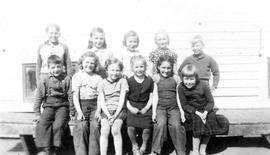 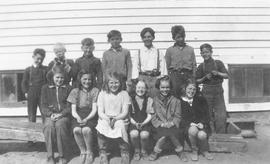 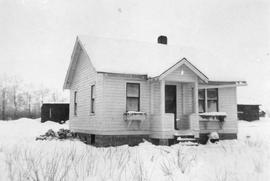 Wallace Tansem was born in Wanham, where his father, Peter Tansem, ran the first store and Post Office. His school years were spent at South Slope school, and he farmed in the Wanham area with his family as a young man.

In 1945, Doris Williams came from Edmonton to teach at the South Slope school. She married Wally in 1946 and remained in the village for more than 50 years.

Always having a strong interest in the little community, Wally & Doris were involved in many activities over the years. In 1958, when Wanham became a Village, Wally was elected the first Mayor. In 1962, they took over the Post Office which had been established by his father. In 1969, with the help of his friend Lawrence Laughy, Wally began to produce a small weekly newspaper. Approximately fifty issues were written before the project folded, but it was resurrected for a time in 1975.

In 1970, Wally became the first president of C.O.C.O. (Community of Coordinating Organizations), a group whose aim was to coordinate all the activities in Wanham which required funding, a place to meet and an executive to make decisions. This group went on to create a fund-raiser, the Wanham Plowing Match, which would see yearly visitors and contestants from across Western Canada.

In 1983, Wally retired from the Post Office, and in the late 90s, the couple moved to Grande Prairie.

Records in this fonds came in two separate donations. The first donation, accession number 2000.17, was in 2000 and was made by Wallace Tansem. The second donation, accession number 2014.50, was in 2014. This second accession was donated by Brenda LaCroix, Tansem’s daughter, and Doris Tansem. They were in possession of these records after Wally’s death in 2001. The records in this accession were originally compiled by Wally and Doris Tansem, with additions made by Brenda LaCroix.

The fonds consists of four photographs of the South Slope School and students taken during Doris Tansem’s time teaching in 1945-46; weekly issues of the Wanhamite, a community newspaper written by Wally Tansem and Lawrence Laughy; printed material authored by Wally Tansem; 20 aerial photographs of the Lassiter area north of Wanham; some news clippings; and Wally’s research files for his self-published book “Foulest of Murders”.

A finding aid is located at http://southpeacearchives.org/wally-doris-tansem-fonds/