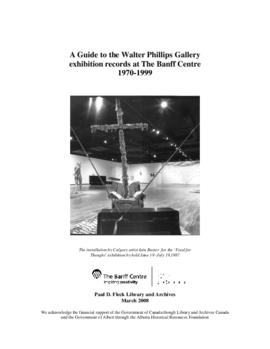 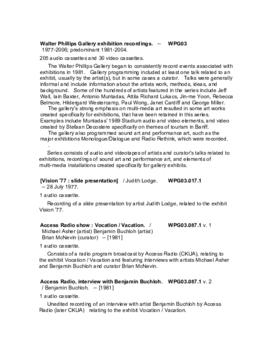 18.8 m of textual records and other material.

The Walter Phillips Gallery opened on August 3, 1976 with the mandate to commission, exhibit, and collect contemporary Canadian and international art. Gallery directors during the period covered by these records include Barry Morrison (1976-1979); Lorne Falk (1979-1985), Daina Augaitis (1986-1994), Catherine Crowston (1995-1997), Jon Tupper (1998-2001) and Anthony Kiendel (2002-2006). The Walter Phillips Gallery presented some 400 original exhibitions from its opening until 2004, showing works of contemporary art in all media including audio and video art, performance art and conceptual art as well as ceramics, fibre art, sculpture and painting and drawing. The exhibition themes were often chosen to complement the research and interests of artists in thematic residencies at The Banff Centre, and often included aboriginal artists. The gallery organized educational programs for most exhibitions, such as community outreach, artist's presentations and other special events, many of which were recorded on audio or videotape. It also produced catalogues for over half the exhibitions. The fonds includes records of exhibitions held at The Banff Centre prior to the establishment of the Gallery.