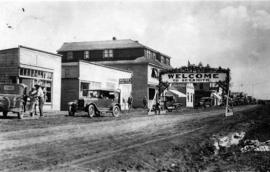 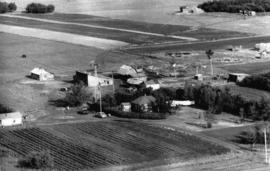 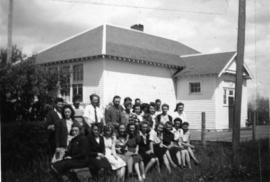 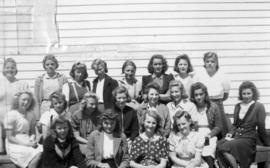 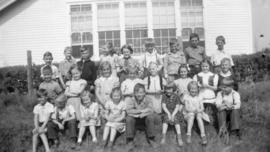 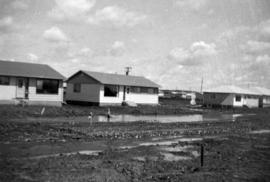 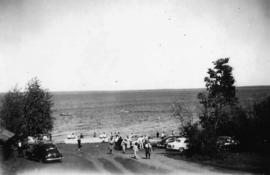 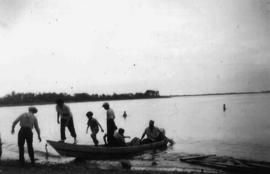 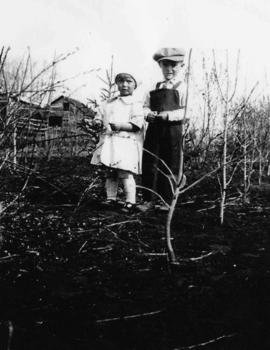 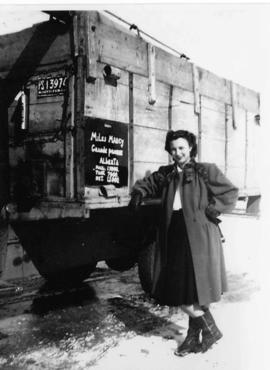 Marion Ward, daughter of Alfred and Anne Ward was born at Johannas in Sexsmith. She and her brothers Lewis, Walter and David grew up on a farm 1 1/2 miles west and 1 mile south of Sexsmith. Marion attended school in Sexsmith where there were two separate schools. Each had two classrooms each with a teacher and three grades. Playing ball was one of the main sports activities and family picnics at places like Bear Lake where swimming was good. In high school she worked in the summer as a hired girl to raise money for clothes that she ordered from Eaton's catalogue. In 1942-43 she worked at the hospital as a ward aide with many other friends and she stayed in the nurses' residence and paid room and board. On weekends she would go down to the Jitney Dance held in a hall on main street. The girls had lots of dancing partners including US and Canadian soldiers. In 1944 she worked at a Sash and Door Factory and saved enough money to attend Vermillion School of Agriculture. In 1946 she married Miles Marcy. Miles Marcy was born in Grande Prairie in 1922 and spent his early years helping his dad on the farm and attending Crystal Creek School. He moved into town in 1942 and worked for Mackey's Concrete Works. Marion and Miles were married on Dec 17, 1946. Miles found he loved the trucking business so soon had a gravel truck, loader, cat and sand screener. He owned two quarters near Kleskun Lake which contained sand pits so hauled gravel and worked for Jack Mackie's concrete business as well. Jack Mackie and Miles sponsored a car in the stock car races. In the winter Miles hauled lumber. Miles and Marion had five children in their Avondale home: Ken, Marilynne (Turner), Greg, Kevin, and Colleen. Ken spent much of his life in the gardening business: Marcy's Flowers and Garden World. He married and had one daughter, Marie. He died in 2006. Marilynne became a Certified Nursing Assistant and has worked 38 years in the Grande Prairie Hospital. She married Mike Turner in 1970 and they raised 3 children: Lisa, Marcy, and Erin. Greg became a teacher, married Laurie McLeod and they have two children: Geoff and Jennifer. Kevin has always worked in the music industry, starting as a drummer and touring with many well known musicians. Colleen was a skating instructor, then trained as an LPN and in 1978 married Trevor Chomik and added scuba diving to her list of sports. In 1991 she remarried Alan Minty they have two children: Alison and Ward. Miles and Marion with friends made several trips into the Monkman Pass and Kinuso Falls in the 1960s. They trucked the horses into Stoney Lakes and then rode into the falls. Their children, Marilynne and Kenny, and Tiny and Alvina Peterson accompanied them on one trip. Miles passed away in 2000 and Marion married John Yurychuk in 2005.

The fonds consists of 28 family photographs, 16 pages of family history and 10-8mm film reels containing a record of the Marcy family activities including home and family, camping and boating, a group picnic at Kleskun Hills, a trip to the Bennett Dam under construction and Kinuso Falls, an Elks Club convention, the TeePee Creek Stampede, and loading lumber at the lumber mill. A VHS recording shows clips from the 8 mm films.

A finding aid is available at http://southpeacearchives.org/ward-marcy-family-fonds/