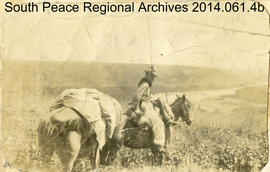 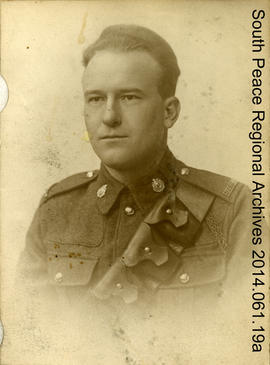 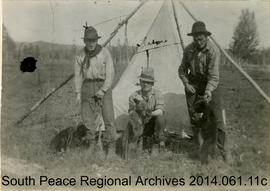 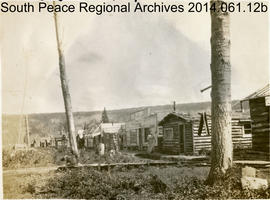 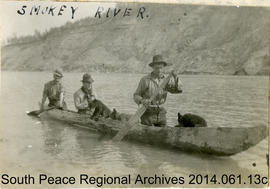 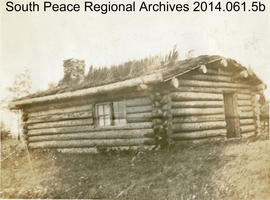 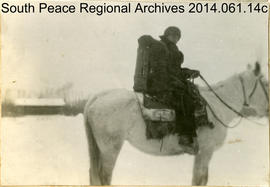 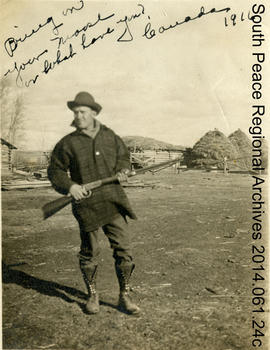 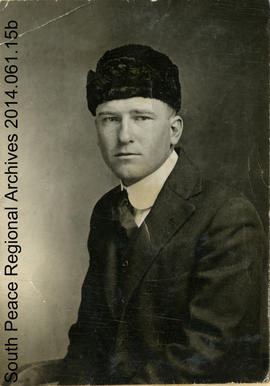 Nota sobre as publicações do editor

William John Noll was born January 15, 1895 in Parkdale, Minnesota, the son of Sebastian Noll and Anna Leibel. Sebastian and Anna were married September 19, 1889 at Sacred Heart Church, St. Paul, Minnesota. William’s brothers and sisters included Edward, Ida, Anne, and Frances. The family appears to have moved to Almena, Wisconsin between the births of William and Francis and it was here that Sebastian died in 1915 (buried at Sacred Heart Catholic Cemetery, near Almena).

In the Spring of 1914, William left Almena and travelled to the Grande Prairie area over the Edson Trail. He filed on a homestead (SW 21-74-8 W6th) on October 30, 1913 and arrived on the land in April 1914. Living nearby were the Frank and W. J. Kinderwater families, who were also from Almena. The Kinderwaters’ brother Joseph Charles Kindervater was married to Ida Noll, William sister. William lived with the Kinderwater family for a while in 1916. He was also a partner of H. C. Plum in the packing business and worked on Plum’s Bar 33 cattle ranch on the Smoky River. William became a naturalized British subject in August 1917 and obtained the patent to his land in January 1918.

William enlisted in the Royal North West Mounted Police in 1918 as a way to get into WWI. According to the Buffalo Trails community book, when he left the area, he left a note on his door saying “Hell of a way to water, Hell of a way to wood, Am leaving this __ ___ country and leaving it for good.” He did return for at least one visit in 1922.

William enlisted in Regina on May 3, 1918 and was assigned to the RNWMP Battalion of the Canadian Cavalry Regiment, A Squadron. He achieved the rank of Trooper and his Regimental Number was 2684235. William served in Great Britain and was finally discharged July 16, 1919. He did not return to his ranch. By the time he joined the Great War Veterans Association, Regina Branch in 1919, he was living in Deronda, Wisconsin, where he became a telegrapher. William later quit and became a cheese maker, also in Deronda. He registered for a dairy course at the University of Minnesota, November 16, 1920, but “lost out” November 18 and became a street car conductor instead. He was fired from that job in December 1921 after a year of service.

William moved to South Bend, Washington and became a clam digger in Spring 1922, then after six weeks of work become a logger May 1, 1922 for the Nemah River Log Co. Later the same year he moved on to the Beaver Creek Log Co. on the Veronica line, where A. R. French also worked. He returned to Nemah River awhile later, but went on strike. Following this, in Spring 1923, he (and perhaps A. R. French) went to the Big Creek Log Co. at Knappa, Orgeon, then to Scappoose, Oregon, where they worked from August 1, 1923 until Spring 1924.

In the Spring of 1924 Noll partnered with Alva R. French, who had been a lieutenant in the American air force during WWI, and Earle M. Shahan in the airplane business. Initially French was the pilot and Shahan the manager. The company owned two planes, the Skylark and Silver Swallow (Canuck) and gave rides to people, mainly along Oregon’s Pacific coast (Corvallis, Newport, Tillimook, Salem, etc).
William started his flight training in May 1924, did his first solo flight on July 26, 1924, and was rapidly involved with flying passengers for pay. William unfortunately crashed the Skylark on October 2, 1924, reducing the number of planes to one. He became frustrated with Earle Shahan’s criticism and on November 2, 1924 left to make his own way.

William worked as a “gandy dancer” at Rock Creek on the Vancouver Line and the East Side Log Co. through November and December. When work ended before Christmas, Noll and French decided to go to Mexico to find flying jobs and got a ride with Fred “Wing” William Wenge. The group stopped in El Paso, Texas, after making a short trip down to Juarez, Mexico. Fred was arrested December 29, 1924 in El Paso for car theft and the following day Noll and French were also arrested. While Fred remained in custody, Noll and French were released on December 31, 1924. Since there were no promising opportunities in Mexico, they decided to return to Portland.
William appears to have resumed his flying career in March 1925 around Oregon, Washington, and perhaps British Columbia and California, maybe even with his former partners. He appears to have taken a break from flying through the first part of 1926, to resume, perhaps only briefly in July 1926 with flights around Idaho.

William’s WWII registration card listed him as living in Warrenton, Oregon. An application form from ca. 1952 for enrollment in the USAF Extension Course Institute in Montgomery, Alabama indicates that he received his original commission in February 1942. He was serving with the Civil Air Patrol (CAP), Astoria Squadron, Oregon Wing at the time of his application, but there is no evidence he actually sent the form or was accepted.

William Noll died June 11, 1963 and is buried in the Ft. Snelling National Cemetery in Minneapolis, Minnesota, although his Social Security was issued in Oregon. It appears that he was never married and had no children.

The fonds consists of a journal kept by William J. Noll from about 1914 to 1925. It records events in his life including homesteading in the Peace River Country, enlisting in the RNWMP and WWI, working in various industries including Oregon's lumber camps, and becoming an early commercial pilot in Oregon. The journal includes written entries, photographs, posters, some employment records, receipts, tickets, cards, and newspaper clippings. Several other loose records are inserted into the pages of the journal, including a WWI medal, Great War Veterans Association membership booklet, 1935 US naturalization papers, correspondence about his homestead and petroleum and natural gas leases, [ca. 1952] USAF course application, and 1917 Canadian naturalization papers. Two pages of genealogical notes presumed to have been written by Clem Kinderwater are also inserted.

The journal ends rather abruptly in January 1925 as William is on his way from El Paso to Portland. The final entry states "Contd in next book." Subsequent book(s) have unfortunately been lost.

The original order of the journal has been maintained, including the original position of inserted material.

The journal was loaned for copy to the Archives in July 2014 by Chris Kinderwater.

The journal has been scanned in its entirety at 200dpi. Selected photographs, primarily those of the Peace River country, have been scanned to 6000 pixels along the longest side. Original journal retained by the Chris Kinderwater.

A virtual exhibit featuring a scan of William Noll's journal is available at http://southpeacearchives.org/publications/photo-essays/diary-william-noll-3/

A finding aid is available at http://southpeacearchives.org/holdings-2/finding-aids/fonds-575-william-j-noll/

Descrição do identificador do registo