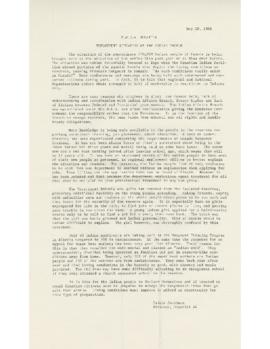 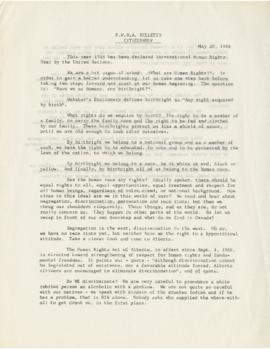 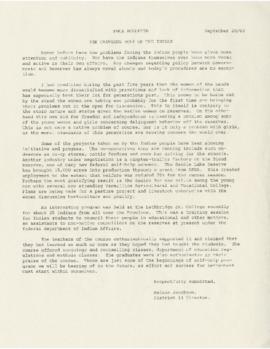 The Women of Unifarm is an auxiliary organization to the United Farmers of Alberta. Originally called the Farm Women’s Union of Alberta, the name changed to the Women of Unifarm in 1970. The Beaverlodge Local #107 has an unknown start date, but they were active in the community as early as 1955. The minutes highlight that the organization planned community suppers, sponsored local events such as trophies for the 4-H clubs, and gave money and blankets to families who were “burned out” of their homes. The ladies attended monthly meetings that were held in member’s homes and made efforts to send delegates to the annual convention in Edmonton. Apparently they sometimes met jointly with the men’s organization the UFA, as at one meeting the ladies made note that the men were absent on account of a hockey game in Hythe. The ladies often welcomed guest speakers at their meetings to give talks on a variety of subjects such as parenting, farming and homemaking.
Committee members listed in 1956 roll call are Ruth Albright Pat Carrell, Ellen Graff, Daisy Brown, Mary Sylvaniuk, Mary Nychka, Ruth Bristow, Kathy Harcourt, Doris Harris, Ruth Johnson, Mrs. Longson, Olive McNab, Alice McGuffin, L. Jewitt, E. Hotte, Mrs. Cleland, Mrs. Lowe, Mrs. McLean, Mrs. Farnquist, A. Hotte, Mrs. Hauger, Mrs. Baird, Mrs. Bauman, Annie Lowe and Isabella Dewar.

The records were preserved by Bettly Longson, secretary of the Women of Unifarm Beaverlodge Local 107. They were deposited in South Peace Regional Archives by her son, Dalton Longson, in 2011.

There was no discernable original order in the records when they arrived. Order was imposed in them by the archivist based on the content of the records.

These records were donated to South Peace Regional Archives by Dalton Longson on November 22, 2011.

A finding aid is available at http://southpeacearchives.org/finding-aids/fonds-546-women-unifarm-beaverlodge-local-107/