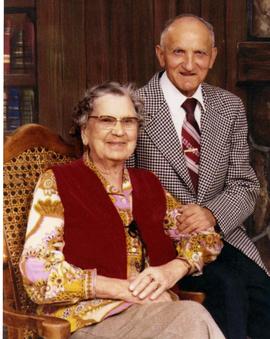 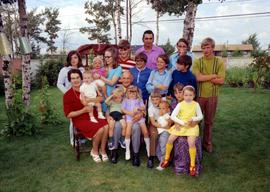 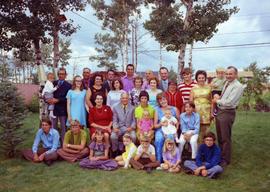 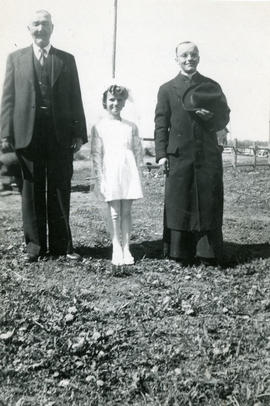 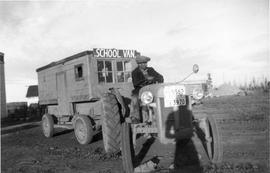 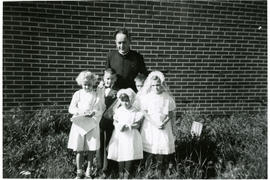 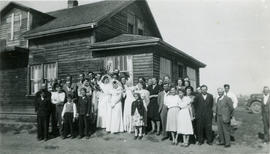 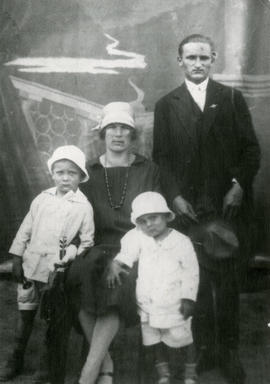 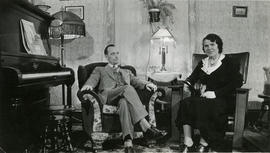 Antoni Wozniak and Maria Parachin were both born in Poland in 1903. They were married in 1922 and by 1930 had four children: Boleslaw (Bill), born July 23, 1923; Mathew, born January 19, 1926; and twins, Merlin and Cecilia, born April 26, 1928. With poor opportunities for the family in Poland and rumors of hostilities amongst nations, the family immigrated to Canada. They had hoped to be able to go to Toronto, where Antoni had two brothers living near Niagara Falls, but ended up on a farm in the Wanham area, arriving June 24, 1930. A cousin's daughter also came with them.

The first few years were very difficult as they were trying to clear the trees on poor land with little money and very little outside work for cash. The children had to work alongside the parents in taking care of livestock, bringing in wood and water, gardening, picking berries and mushrooms, hunting chickens and ducks so the family had enough to eat. They attended South Slope School in Wanham, about four miles away. In 1935 the family moved to the Tansem farm, where Edward was born on December 4, 1936. Here they cleared land enough for a garden and small fields of wheat and oats. The children now went to Fox Creek School, still four miles away. Maria melted snow to feed cattle and to wash clothes for an English family for $2.00 a month. In 1936 on to their own place at Codesa, and the children could now go to Codesa School. Roman was born in 1938, the same year a forest fire destroyed their barn and the logs for their new home. A new house was finally built in 1940, and in 1942 another forest fire destroyed crops and granary.

By 1939, Antoni and Maria finally felt they could afford to bring Antoni’s mother over from Poland, but while she was getting her papers in order, war broke out. Russia occupied their part of Poland, and many of their family members perished in either the war or later exile in Siberia. Antoni’s mother and his sister, along with her husband and three children, were exiled to Siberia. Only one of the children, a girl named Christine, survived and later immigrated to London, England.

The oldest children stayed in farming. Bill joined the Canadian Army in 1942 and was sent overseas. He served in the Italian war campaign, and also in north-west Europe. After the war he returned to farm in the Belloy. Mathew worked on the family farm after he finished school until 1945, when he filed on his own homestead.

After the war, the Wozniak farm prospered and they were able to send the younger children to university. In 1964 Antoni and Maria sold the farm to Mathew and Barbara, and retired to Grande Prairie where they were involved in many aspects of the community. Antoni was president of the Peace River Polish Society for many years. In 1986 they made a trip back to Poland. Maria passed away in 1988 and Antoni in 2002.

Bill married Stephanie Mycek in 1951. They raised two children, Gerald and Deanna. In 1969 they sold the farm and went into the hotel business in High Prairie. Mathew married Barbara Klukas in 1949. They raised two children on the farm: Patrick, born in 1951, and Elizabeth Jean, born in 1953. Cecilia finished high school in Spirit River and Grande Prairie. She married Wyatt Bailey ca. 1950 and moved to Texas where they raised four children. Merlin finished his education at the University of Alberta and the University of Toronto. Edward attended Spirit River High School before he went on to the University of Edmonton and became a geologist in Vancouver. Roman went to Spirit River High School and then on to the University of Alberta and did his final studies in Oklahoma.

The fonds consists of a few personal papers belonging to Antoni and Maria Wozniak; the memoirs of Maria (Parachin) Wozniak written in Polish in 1958 and translated by her son, Matthew; Maria’s diary of a trip back to Poland in 1986; letters written home by the six Wozniak children; photographs of the family, the farm, and the community; stories written by Mathew about his life and memories; and a collection of 8 mm film taken by Mathew Wozniak during the 1960s and 70s.

The records were donated to the South Peace Regional Archives in several donations from 2007-2015 by Mathew Wozniak.

A finding aid is available at http://southpeacearchives.org/wozniak-family-fonds/