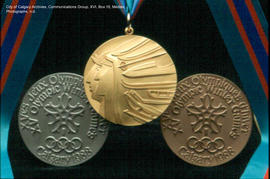 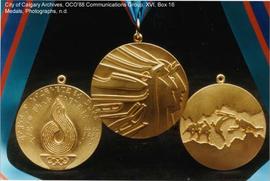 A "Communications" section was part of the organizational structure of OCO'88 from its formation, although it sometimes appeared on early organizational charts under various other names, such as "Public Affairs" or "Public Relations." The title "Communications" was most frequently used, however. Frances Jackson, the first Vice President of Communications, was among the very first appointments to the administration of OCO'88 in 1982. Initially, she was to report to the Vice President of Marketing, although this reporting structure was soon changed if it ever existed in practice. Her mandate was to be "accountable for the provision of a group of communication services related to the positive identity and image of the XV Olympic Winter Games through the expertise and leadership provided to professionals and administrative staff that achieves the images being sought for this unique event." These duties included public relations, publicity, press, radio and television services and the cultural programme for the 1988 Olympic Winter Games, and extended into Language Services, a Library/Archives programme, and developing the graphics for the 1988 Games. An organizational chart of the Communications "Group" distributed these tasks among five Departments: Media Relations, Public Relations, Culture, Language Services and Archives. The records of this series do not clearly reflect the existence of these separate Departments, but they do reflect the importance given to OCO's relations with the media right from the onset of its work. For more information regarding the XV Olympic Winter Games, Communications Group administrative history, please link to the City of Calgary Archives homepage and click on the "fonds level descriptions" link.

The administrative unit of OCO'88 which eventually became the Technology Group had the mandate to provide equipment and computer systems to support the communication and transmission of electronic data and video images as well as voice and sound at and between venues. This Group was also responsible for timing, scoreboards, public address systems, paging, radios and video services. Those sections of the OCO organizational structure which were developed to carry out these functions were, in the early stages of OCO's development, quite separate and diverse, with rapid and frequent changes to the names given to Groups, Divisions, Departments as well as to the titles of the officers in charge of these levels of organization. In early 1982, OCO consisted of six major "Groups" (see the Administrative History of the Executive Group), of which two Groups were responsible for carrying out the tasks associated with "Technology" as outlined above. The Technical Services Group included "Technology" in its operations, while the Administration Group was responsible for "Systems." By 1983 August, many organizational changes and appointments of officers had taken place. Facilities and Technical Services, headed by Divisional Vice President, Ron Collie, was a "Division" of the Olympic Services Group, under Group Vice President, John Pickett. For more information regarding the XV Olympic Winter Games, Technology Group administrative history, please link to the City of Calgary Archives homepage and click on the "fonds level descriptions" link.

The fonds consists of 23 series, each of which is introduced by an "Administrative History" section and a "Scope and Content" note. Lengthier narratives have been added at the series level, rather than in the "Administrative History" of the Communications Group above. In some cases, added "Notes" complete the Series Descriptions. Series I and II are the records of the Vice Presidents, Communications Group: Frances Jackson Dover and Jared Joynt. Series III to XI contain the records of the Public Relations Division. The records of the Media Division can be found in Series XII to XIV, with Culture Division records in Series XV to XXII. An artificial series of publications, cultural historic items and other ephemera concludes the Series Descriptions. The records of the Communications Group are "multiple media," but the vast majority of the material is textual. Photo prints have been enclosed in acid-free enclosures and remain with their original files; oversize material (blueprints and plans) have been removed from their original files and placed in appropriate oversize storage. Notes have been added to indicate where this has been done. Listings of all oversize material from each series have been placed at the end of the "File Listing" section for each Series. Videos, sound recordings, film and computer diskettes may also be found in some of the Series. No special conservation measures have been taken for these media at this time. The main conservation problem in these records was that of facsimile documents. All "faxed" documents have been photocopied for the purposes of preservation. Where possible, newspaper clippings have also been photocopied for preservation purposes.

Records were transferred directly from OCO'88.

Accruals are not expected.

Information on OCO'88 may also be found in the Olympic Hall of Fame at Canada Olympic Park, Calgary; at the Canadian Olympic Association offices in Montreal and Ottawa; and at the headquarters of the International Olympic Committee in Lausanne, Switzerland. The City of Calgary Archives may have reference material which may be associated to the fonds. All textual records are in closed storage. To view records please contact the City of Calgary Archives.<br><br>